Legend of the Psychotic Forest Ranger (2011) 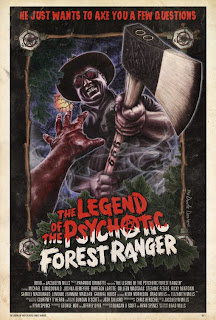 Does the world need another send up of slasher movies, given that so many slasher films post-Scream already have their tongues in their cheeks? Actually, do we need another one after the 1982 send up Student Bodies? Probably not, but it sure helps that this one is fairly amusing and has a good eye for the details of those eighties stalk-and-slash epics that made so many of them so cheesy in the first place. The filmmakers do a good job of picking out bits of dialogue that we’ve heard a million times without notice and giving them a humorous spin. They're also good with little background gags.

The psychotic forest ranger in question is played by Aaron Corbett as one of those guys who takes his job way too seriously. In credits footage, it’s explained that he was studying for the seminary and decided to do God’s work as a forest ranger instead and went missing after a horrible fire. In keeping with the slash film tradition, the back story doesn’t make much sense, but it’s a good character and the filmmakers are already trying to rally support for more psychotic forest ranger films, which one supposes hearkens back to the slasher film convention of franchising the shit out of characters. That got old pretty quickly as I recall.

The nice thing about this flick is that it doesn't hammer you over the head with the jokes; it's a lot more wry than the Not Another ____ Movie school of "Hey! Here's the joke! Look here!" parodies. There were three gags that I liked quite a bit. The first has to do with the characters- the film is about a group of friends heading into the woods to celebrate graduating from high school. We have a jock, his prankster buddy, an uptight and paranoid brunette, and her vain and shallow friend, which is basically the group of friends in all these movies. About halfway through, they run into another group of friends: a jock, his prankster buddy, an uptight girl, and her vain, shallow friend. In the second gag, as their friends go missing, the group comes up with increasingly implausible explanations for what's going on, one of which has to be dramatized because it's so convoluted. Finally, there's a nice running joke in which characters turn off the radio bored right when the newscaster is announcing really pertinent information.

For the downsides, well, I would have enjoyed it if they'd featured some of the rampant and irrelevant-to-the-plot nudity of those slasher flicks; I' m guessing it's harder to get your friends naked on screen in the era of internet screen captures. Also, the gore could have been a bit more plentiful or even semi-realistic without hurting the proceedings. Finally, we all know how I feel about digital video, although of course a film with this low a budget isn't going to have access to film.

As you can imagine, alcohol serves as fuel for these proceedings- the amount of booze you consume beforehand will determine how long you find this funny. I was about half-lit during the Shock Stock screening, so I was laughing almost through the second act and it picked back up in the third. It’s definitely a very amusing homage to slasher flicks and I’m pretty sure fans of the genre will get a kick out of it. I also suspect it will reward repeated viewings. 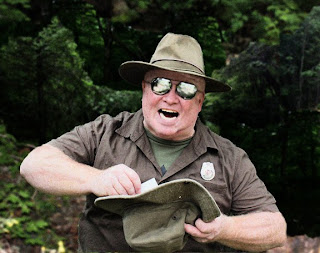 But, if we’ve learned anything from the Scary Movie series, it’s that you can only return to the well so many times with this stuff. The filmmakers have shown a sure hand with their material on this one and it would be great to see what else they can do. Unfortunately, while the filmmakers have said you can head to their Facebook page (of course) to show support for more psychotic forest ranger films, they haven’t one for, “It was funny once, but now try something different.”
Posted by Rufus at 7:40 AM