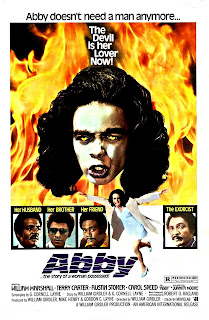 I've said before that it's pretty hard to make an original movie about exorcism since the rite itself isn't going to be changed much, nor is the story arc: someone gets possessed, exorcised, and un-possessed. For this reason, all of them seem like ripoffs of William Friedkin's classic and they pretty much all are ripoffs. So, it's a little surprising that Warner Brothers decided to sue American International over this one, which is basically the Exorcist with a black cast, and not all of the other Exorcist rip-offs. Now, of course, since we've happily given up on the idea of a horror film being original, it would be taken in stride and the Abby "reboot" would be ready by next summer.
The lawsuit was successful, incidentally, and AIP pulled Abby from theaters. It's been hard to find on DVD, but I have my sources. Yes, it's a total rip off of the Exorcist, but an entertaining one with an all-black cast.. Clearly, the idea was to make a blaxploitation Exorcist- AIP even wanted to call it the Blackorcist- but it's better than a blaxploitation Exorcist has any right to be.
The Exorcist begins with a priest unearthing a statue of the Babylonian Pazuzu. Abby begins with a black priest and archaeologist (played by Blackula himself, William Marshall) heading to Nigeria (or a cave proximity) and unearthing a statue of the Nigerian demon Eshu. He's a sex spirit so he blows them all over the cave, so to speak.
Eshu hightails it to Kentucky to possess the priest's daughter-in-law Abby, played by Carol Speed. It would have made more sense to possess the priest, but why question the motives of Eshu. Also, William Marshall being turned into a horn-dog by a sex demon would be less entertaining. Finally, when you think about it, the Exorcist doesn't make a fuck of a lot of sense in this area either- demons are apparently really into American girls! 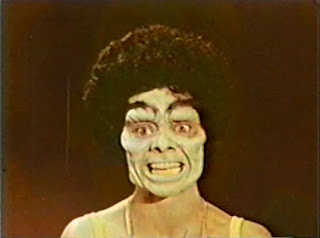 Abby and her preacher husband are an annoyingly perfect couple and everyone around them comments on how perfect they are. This includes her loving mother who hangs around them and smiles a lot about how wonderful is "the love of a good man." Clearly, the bitch needs to get a life. And then you have her brother who also hangs around talking about how perfect they are. Now, I do appreciate that this is a blacksploitation flick in which the black characters are portrayed as intellectual, morally-upright people, as opposed to the jiving comic relief in so many of these movies; but damn is it hard to relate to people who you basically want to see get possessed from the start!
Thankfully Eshu finally shows up and Abby starts masturbating loudly in the shower. The demon makes Abby behave like a lascivious, bitchy slut, which is perhaps shocking, but for viewers like myself also hilarious. She kicks her husband in the dick when he tries to make the moves on her. She interrupts a couple's Biblical study by tearing open her shirt and yelling, "I'm going to fuck the shit out of him right now!" She throws her wedding ring out the window and goes down to the local bar to fuck every man she meets. In other words, my kind of girl! 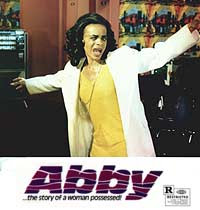 None of this is particularly scary, although there are some creepy bits with Eshu's face getting superimposed (just like in the Exorcist) and Speed making some godawful expressions (just like in the Exorcist). The plot basically follows that of the Exorcist, with Marshall exorcising the demon from Abby in the local bar. Interestingly enough, director William Girdler also made the satanic sacrifice movie Asylum of Satan as well as the indescribably weird and goofy Exorcist rip-off The Manitu before dying in a tragic helicopter accident (well, mostly tragic- he did make Grizzly!).
This is the biggest problem with these Exorcist clones: you know how they're going to end. Don't get me wrong- watching Carol Speed get possessed by a sex demon and behave like a horny slut is probably more entertaining than all of the Exorcist. But Friedkin's movie is still one of the best horror flicks of all time. It's like making Black Citizen Kane or Gone with the Black Wind or Wild Blackberries or the Black Godfather- oh, wait a second.
Posted by Rufus at 10:22 AM