If you were a single lady and you woke up with a cat burglar robbing you, what would you do? Grab a spoon from the night stand and scoop out his eyeball, right? Well, that's exactly what happens to Arthur (Bo Brundin, who appeared the next year in Jerry Lewis's lost Holocaust epic The Day the Clown Cried) in the beginning of The Headless Eyes (there's a great band name for you), Kent Bateman's serial killer opus from 1971. The lady in question removes his eyeball, setting him off on an ill-fated obsession with getting people's eyes and saving them in his shit hole apartment that rivals the one in Eraserhead for sheer grubbiness. Some he keeps frozen in blocks of resin in the freezer. He's also an artist.

Arthur is unsuccessful as an artist, but surprisingly successful in killing, bludgeoning to death a married couple that let him into their house because they remembered him fondly from staring insanely at them on the street! The gore is darker and more realistic than the usual poster paint red used in horror movies from the era and the killing scene is fairly disturbing. Cementing the sense that New Yorkers in the 70s were dumb as a brick, Arthur is soon picked up by a hot blonde hooker in a miniskirt moved by the sight of a mumbling manic stranger covered in blood on the sidewalk and does what you'd expect. The new tourism slogan should be "New York: We make killing easy!"
His ex-wife comes back to save him from his self-imposed exile and "from whatever it is that's changed you". She doesn't even ask where his eye went. In response, he rants for quite a long time about the finer points of madness in a scene that perches right on the line between creepy and melodramatic. Much of the movie maintains a squalid, gritty tone helped a lot by the fact that it was clearly made for a few thousand bucks at most. Later, a young artist approaches him and seems to offer, briefly, the hope of a better life- one with less eye-gougings. 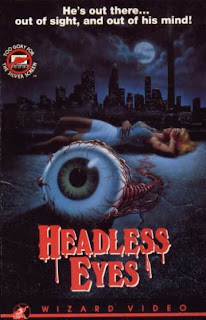 There are also some nice touches. Arthur hangs out in the crowd of neighbors being interviewed by a news reporter about the killings. There's a senile old lady who sits on the sidewalk mumbling, "I know who did it!" At one point, Arthur has a hallucination in which he's running around the streets dressed in white. Throughout, there is some fairly effective psychedelic jazz on the soundtrack. It's not a completely artless film, although it has its share of poorly composed, out-of-focus shots and meandering sequences.
The problem is that the story itself meanders way too much. Arthur kills a woman, does some stuff at home, kills another woman, does some other stuff, and so on and so on. What's wrong with Arthur is never really explained, although the police detective's explanation for the killings is great: "God knows. Some kind of pervert, demented, I don't know." The killer talks to himself a lot and offers the explanation, "I... am... twisted!" at one point. That's pretty evident, thanks. He seems to hate women, probably thanks to losing his eye, and kills plenty of them. But the somewhat mellow jazz and focus problems kill any tension and the film drags. Not a lot really happens. It was just weird and disturbing enough to watch once, but that's about it.
Posted by Rufus at 2:34 PM No comments: 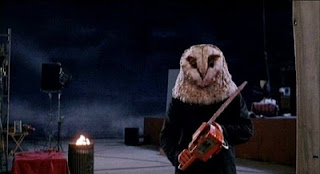 A haunted house epic with a perverse domestic twist or two, Shock is perhaps middling Mario Bava, but it has some memorable images and maybe even a shock or two.

A couple and their son moves into a house that they probably should have avoided altogether. The wife Dora, played by Argento regular Daria Nicolodi, is understandably uneasy about moving back into the house, where her first husband, a junkie, killed himself, but her new husband Bruno, played by John Steiner also from all sorts of Italian flicks, insists on it- quite the sensitive husband there. (To round out the feeling that we're with the Italian exploitation repertory company, Ivan Rassimov shows up as a doctor.) Making matters worse for Dora, their son Marco is one of those little kids in movies who are easily amused by paranormal happenings in old houses, and he's at that difficult age where they're so susceptible to being possessed by their dead fathers.

What's fairly effective about the movie is that Bava keeps it unclear whether the kid is possessed, the father's ghost is haunting the joint, or they've just got a brat for a son. Marco resents his mother's relationship with Bruno and makes all sorts of difficulty, at one point telling his mother that he has to kill her. He may or may not have sent her flowers, allegedly from her dead husband. At one point, Marco pretends to hump her. Before long, things start moving around the house on their own and Dora is hallucinating rotting hands grabbing her. She starts slipping in her domestic duties, leading Bruno to remind her, "There's nothing worse for a marriage than sending a husband off without his coffee". Nothing? One would think being haunted by a vengeful junkie ghost would cause more problems.

The strength of these haunted house films is their atmosphere. Bava does a good job here with the sound design and striking visuals, such as a scene in which Nicolodi's hair goes every which way as she lies in bed and another in which Marco suddenly becomes the dead husband. Admittedly, as with most of these movies, there's only so many scenes you can take of people wandering around hallways and basements alone. Also, even after the plot reveals its dark secrets and explains why Bruno and Dora moved back into the house it doesn't really make sense. But, there are some good moments of fear and Bava and Nicolodi knew what they were doing by this point, so it all works out.
Posted by Rufus at 5:45 PM No comments:

Poor little Linda Blair's acting career only went south after the Exorcist, which in the 80s meant she was appearing in skin mags and exploitation films. In the case of Red Heat, she's made a fairly convincing case that she actually believed she was making a serious dramatic story of one woman's survival in an East German prison under Communism, instead of another women-in-prison flick with all of the requisite soapy shower and steamy lesbian sex scenes. It's convincing because the movie quite often seems like a serious drama and only delivers the exploitation goods intermittently.

Blair plays Christine Carlson, a nice American girl in East Germany to visit her Army boyfriend Mike at the same time that a lady scientist is trying to escape to the West with commie state secrets. Stumbling into the cliched wrong place at the wrong time, Christine gets hauled in with the turncoat scientist and taken to an East German prison where she's forced to confess to crimes she never committed and sentenced to thirty years. For the first half hour of the film, it really does play like a serious cold war drama. At least until Christine wanders into a four girl fuck fest on her first night in the clink.

The head lesbian tough girl, Sofia, is played by Sylvia Kristel, who certainly looks a bit rougher around the edges here compared to her breakout role in the original Emmanuelle. Naturally, Sofia's got a relationship with the super butch prison guard. Indeed, all of the cliches are accounted for: the beaten down old timers who have given up hope, the kindly older woman who befriends our new fish heroine, the bullying dykes, and the girl who is abused so long she gives up hope and kills herself to get away from the bullying dykes. One wonders how more PC viewers respond these days to the fact that the lesbians in these movies are nearly always the malicious villains, or if it gets in the way of their enjoyment of all the tits and pussy eating. One weird thing- everyone in Germany speaks English in this movie.

Then there's all the tortures and beatings. This one gets particularly ugly early on with a nasty violation scene. Admittedly, if you're watching a women-in-prison flick, you sort of have to expect that, at some point, something will be shoved up a vagina by someone. Sofia is a pretty decent bad girl; in an interesting twist, Kristel's character is openly dominating the head guard. Also interesting is the totalitarian East aspect of the story. In one particularly interesting scene, the women are made to watch a propaganda film about how Communism has liberated the working class.
But, if you've seen more than one of these films, you know where the storyline is going: Christine finds her inner strength and becomes an inspiration to those beaten down old timers, while Mike works round the clock to free her. Eventually, the yanks break her out, but there's not as much lesbo commupance as one might expect. In general, Red Heat suffers greatly from taking itself way too seriously to be a fun exploitation flick and being way too poorly made to be a serious prison drama.
Posted by Rufus at 10:23 PM No comments: