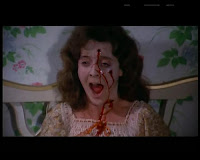 Piper Laurie hams it up as a southern belle haunted by her dead boyfriend in Ruby, a southern-fried possession flick that's more entertaining than it has any right to be. It also has a lot less possession than you'd guess from the ad campaign, which features 70s actress Janit Baldwin making some really creepy expressions, but happily it has plenty of other weird shit.

In the 1930s, gun moll Ruby Claire's lover Nicky was gunned down by her gangster boyfriend and the Dade County Gang down in the bayou in a neat opening scene that reminded me vaguely of Creepshow. As he sinks beneath the swamp, Nicky vows revenge and, simultaneously, Ruby goes into labor with his brat. Now, Nicky never knew that Ruby didn't set him up, which is an important plot point because he haunts her, but she sort of deserves it anyway.

Why? Well, she pretty much put the Dade County Gang to work in her drive-in movie theater where she's living in the 50s. She's living in decadent Southern Gothic luxury with her old man, the gang, and her mute daughter (played by Baldwin) and is played by Laurie as a sort of Southern Norma Desmond. We learn at some point that Ruby was once a movie actress and nightclub singer, but has since gone to seed. Unfortunately, not enough is made of this- it would have been cool to see more flashbacks to her old moll days or a drunken rant about the new drive-in movies. The 50 foot woman stayed big; it was the pictures that got small!

Anyway, the movie is basically a ghost story for the first two thirds. The mobsters all work at the drive-in and get killed off in creative ways by an invisible assailant. A highlight is the goon who gets shoved in the guts of a coke machine, which then delivers a cup of blood. In the third act, the film switches to a possession story with Baldwin acting a bit like Linda Blair and a bit like the horny dead mobster who wants to get back together with Ruby and, meanwhile, hoodlums keep dying and Laurie wanders around the drive-in lot drunk at night.

I know what you're going to ask and, yes, it's about as silly as it sounds, which is why I found it enjoyable. Making matters even more confusing, director Curtis Harrington got fucked on the ending of the film- his was more romantic, which makes sense because it is a movie about a woman who's in love with a ghost, so it makes the most sense for her to kill herself somehow. They replaced this with Piper Laurie getting drowned by a skeleton, which just looks cheesy as hell. Also, there's a whole other version of the flick going around with the TV edit, which had entirely new scenes shot and directed by Stephanie  that reportedly don't make a fuck of a lot of sense. I'd go with the VCI DVD (with commentary but without the later Kiss of the Tarantula double feature) and drink a few beers before watching because it's a loopy hoot.
Posted by Rufus at 1:17 PM