It’s the future after the apocalypse and the world looks like the deserts outside of thanks to a nuclear war and the fact that it was cheaper to shoot in the deserts outside of . The nuclear war and the collapse of all civilization has led to people reverting to the norms of pre-medieval barbarian tribes, which it tends to in these movies, although you’d really think people would try to recreate their own lost society, as opposed to pretending they’re at the Renaissance Faire. Anyway, David Carradine plays Kaz Oshay, son of famed warrior Oshay, and wears a loincloth, which again is a critical point.

Carradine is out romping about in the California deserts when he gets captured by some dudes in white suits on hopped-up dirtbikes. The guys also capture Claudia Jennings, who plays Deneer, member of a nomadic tribe. In the process they also capture the rest of the tribe, but a brat along with them gets captured by some desert mutants, so that’s a subplot as well, although a very small subplot because Allan Arkush probably didn't want to deal with the difficulties of directing a kid.

Anyway, Deenan, Kaz and his loincloth are taken to a walled city, which is ruled over by a dude who’s losing his marbles from radiation poisoning and his goon Ankar Moore, played by Richard Lynch, who is afflicted by the same laryngitis he has in every movie. Realizing that Kaz and Deenan are great warriors, the authorities torture them, using super high-tech devices that mainly involve flashing lights and strings of beads hanging from the ceiling and offer a handy excuse to show Claudia Jennings naked, not that I’m complaining.

When our heroes try to escape, they’re forced to fight in the “Deathsport”, a sort of gladiatorial joust on the “death bikes”, which are those retrofitted dirt bikes- retrofitted for death! Note: There will be no death refunds for anyone arriving after the designated starting death-time. Anyway, they defeat a bunch of death-guys on death-bikes and Lynch sets off the landmines that cause a whole bunch of shit to explode in fireballs, including a number of death-bikes. Corman likes blowing shit up in his movies and, as noted in the documentary Corman's World, he likes using a motorcycle until its trashed and then blowing it up- hard logic to argue with. Unfortunately, you're not gonna get a death refund that way. 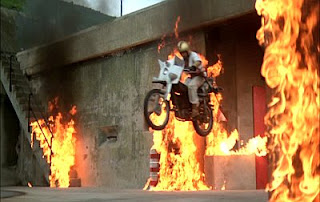 Jennings kills the king during her naked torture using only her powers of nudity and Carradine escapes during the Deathsport and they both go on the lam. Lynch probably could take power now and forget about the two of them, but he’s a bit bonkers too and, besides, the movie would be pretty short otherwise.

After that, there are a lot of battles in which the dirt bikes blow up really easily. Clearly they're called "death bikes" (or "destructobikes", I forget) because they blow up really easily. One would imagine it was not a masterstroke of intelligence to send out an army in bikes that explode really easily though. There are some cool Raimi-cam shots taken from the front of the bikes and a battle with clear plexiglass swords that look pretty nifty. Actually, a lot of this movie seems to have been devised with the intention of looking super neat-o cool, which is nice if you're either below the age of 11 or really drunk.
Posted by Rufus at 6:35 AM