Holy shit! This is the 100th review on Rufus's House of Horrors!

Okay, now that we've gotten that out of the way, Sugar Hill is a highly memorable soul cinema take on the zombie genre with a pretty unbeatable premise: the mob killed her man, so she sent zombie hitmen after them! I'd been waiting to see this one for years, having owned the poster for over a decade. Finally, I got my dirty little hands on a bootleg edition (I know, I know, but I've yet to come across an official DVD release) and it did not disappoint, much.
The film begins with a fairly authentic-looking voodoo ceremony scored to a decent soul number entitled "Supernatural Voodoo Woman" with the haunting refrain, "She do voodoo on you!" The dance is being performed at a bar down somewhere in the Bayou. It's not exactly the Copacabana, but for some reason a bigwig named Mr. Morgan wants to buy it and has sent his goons in fairly outrageous suits to rough up the owner Langston. We can tell that Langston is a tough customer, in spite of his glitter tuxedo, and we can also tell he's in love with his woman Diana "Sugar" Hill (Marki Bey), who is pretty much from the Pam Grier school of Blacksploitation foxy mamas.
Sadly, she's not great at conveying sorrow as we soon discover when Langston runs afoul of the goons. Proving that their violence extends past the color schemes of their suits, they jump Langston in the parking lot and beat him to death. Sugar finds her man and emotes terribly. But, she's got more than bad emoting in mind- she wants revenge, which she gives away through foreshadowing dialogue to her ex-lover and current detective Valentine stating her desire to "watch them each die one by one, slowly."
What sort of revenge? you ask. Shit, you should have listened to the theme song! Sugar goes to the old voodoo woman Mama Maitresse, who conveniently lives in her family's run down mansion and calls for some voodoo helping. Mama asks Sugar the pertinent question, "How strong is your hate?" to which she replies, "As strong as my love was, my hate is stronger" and we're ready to go. Before you can say, "she do voodoo on you," Mama's conjured up the voodoo god (yeah, I don't know) Baron Samedi (which sounds an awful lot like... oh, crap!) and his zombie army, who all have grey skin and cool silver eyes and look like badass robots. Naturally, Sugar promises her soul in exchange for the zombies killing her enemies. 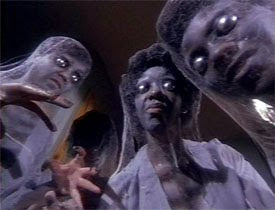 The Baron is played by Don Pedro Colley in top hat and tails and with a scenery-chewing sense of delight. The silver zombies are a cool bit of design, although they seem to be constantly covered in cobwebs, which is a bit distracting. Bey does a fairly good job in the title role; she's better at playing angry and badass than howling in despair. As is the norm in these movies, she sets about administering vengeance to the honkey jive ass crackers.
Morgan, the head cracker, drinks liquor and calls his underlings horrible things like "pigeon head". His racist trophy wife Celeste (Betty Ann Rees) hates Sugar and takes part in a hot girl fight with her that seems to have no bearing on the rest of the plot. I've never entirely understood why karate was so central to the blacksploitation genre, but, hey, who's complaining? The storyline is pretty much summed up by the poster- the mob took her man and now she's getting revenge with her zombie hitmen. Trust me- you know what you're getting with this one and Paul Maslansky's direction is fairly unobtrusive. There's little gore and no nudity, which is a pisser. It's one of the few 70s PG movies where the rating doesn't seem too far off.
But, you know, that's not much of a gripe. It's really hard to really dislike a movie with soul music, at least three actors taking part in a scenery-chewing competition, and a scene in which a mobster is menaced by a floating severed chicken foot. I'll keep the poster.
Posted by Rufus at 8:51 AM No comments:

My stomach dropped a bit when I saw this one was directed by Roberta Findlay; an exploitation old hand who went from making porn with her husband to horror with her husband to losing her husband in a tragic helicopter accident and then back to making porn and horror on her own until her death, Findlay has maybe one decent film to my mind: Tenement, which isn't exactly that decent. Admittedly, though, I haven't seen her entire body of work, so maybe there's a Juliet of the Spirits in there somewhere.
This aint it. This one has to do with some monks in the 1400s who decided to play for the other team and started worshiping Satan with the pretty lame promise that, for each relative they sacrificed, he'd give them 13 years of immortality- maybe nobody explained to them that "immortality" is supposed to last more than 13 years- anyway, they're still around and serving the Church, which must be really behind in its records not to notice. The leader of the Satanic Priest pack is Father Seatan (hammed up like crazy by William Beckwith) the sort of Priest who seriously would arouse suspicion, even if he weren't 600 years old. In a surprising plot twist, however, he seduces women who are neither prepubescent or male- the Church might look at this as progress. 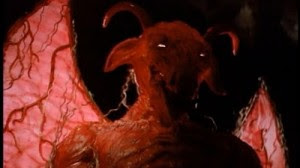 Luckily, a few Catholics are on to him and they send a nun to infiltrate the devil cult, which is really, really easy- she just has to burn her habit, smash a porcelain Jesus with a hammer, and voila! it's smooth Satanic sailing! Then the question is whether she'll get the cops to stop the sacrifice in time or get pulled out of the cult too early- nuns being inexperienced at pulling out. The cops are idiots, frankly, one of whom uses sophisticated insults like "fart breath" to show he's been on the streets too long. As we know from many a hip hop song, the cold, hard, dirty city can turn anyone into a poopy head.
There's also this girl Alexa, who is the descendant of the cult and being seduced by Father Seatan. Played by Christine Moore, she does a decent job, which isn't easy with dialogue like a scene in which she explains that she doesn't like sex because her father's buddies used to take pictures of her in fake-sex poses with a little boy. Ewwww! She's unfortunately got a friend who's horny all the time and who has the best line of the film: "Don't cha wanna get poked?!?"
There's also a hulking moron stalking around and kidnapping women, and Satan himself, who is naturally a rubber puppet that looks cool enough that one assumes it was the entire justification for making the movie. Is there a justification for watching the movie? Well, the direction is workmanlike, Beckwith is fantastic in a Shatner sort of way, and the whole movie is funnier than it's intended to be, so yes!
Posted by Rufus at 5:10 PM No comments:

Yeah, I know- I suck at blogging regularly. This is because I am lazy and booze makes me lazier.
Okay, 1978's Suspiria homage Terror is good bloody fun in a totally daft and illogical sort of way. But, let's be honest, Suspiria is also good bloody fun that's totally daft and illogical.
The film begins with an effective credit sequence featuring creepy pictures of people in pain and somewhat prog rock organ music. Then, bam, we get a mob of angry villagers with torches hunting down a woman and preparing to burn her as a witch. Before they can get that done, though, she screams, "Master, help thy servant!" and the lot of them get lit up instead. They finally get her burned up, but she shows up in a noblewoman's house, vows to curse her bloodline, and lops off her head! 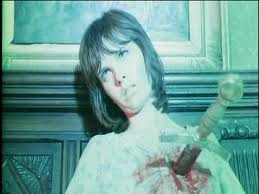 And then we discover it was all a movie made by some 70s hip young people in the old house where it really happened. They're all English, so they call each other "dear" and "love" constantly, but otherwise they're the usual drug-taking, sexually promiscuous, ready-made victims. However, two of them were actually related to the cursed bloodline and the story was true. And the curse is real!
Before too long, Ann, a cute bird from that cursed line who's been hypnotized for a party trick picks up the sword and tries to carve up a fellow- sorry about that, love! And then another bird wandering in the woods gets a bit of the old stabby stabby and is left pinned to a tree. I suck at British slang as well as blogging.
What follows is a mild parody of the world of 70s filmmaking with a good amount of stalking and slashing. The slashing part is surprisingly gruesome and lovingly detailed; director Norman J. Warren was somewhat known for his love of the red stuff. And he uses it well here. The film is rather light on sex, but there is a nice bit with a "punk rock" stripper that sets the film firmly in 1978. There's also a mystery afoot because we don't know if Ann's bonkers and killing people, there's someone else doing so, or it really is the witch's curse.
Actually, I'm not entirely sure what was going on with all the bits in the movie. The film goes from supernatural mumbo jumbo to typical slasher film and then, suddenly, back to supernatural mumbo jumbo with everything in a sound-stage coming alive and attacking a character. There's also a woman stalked by a levitating car- seriously. All of this is great, but who was doing the stabbing? Why is the witch who shows up the same woman as the fictional movie-within-a-movie? What the fuck was going on with that levitating car? And, seriously, if this is a bloodline curse, why do all those people not related to the family get killed?
Posted by Rufus at 2:32 PM 1 comment: