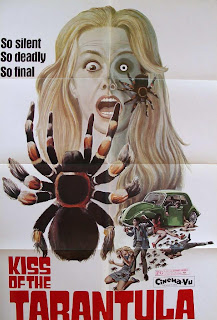 Basically Willard with spiders, Kiss of the Tarantula features a female social misfit with pet tarantulas that do her evil bidding. I'm struggling to think of anything else it features. Mostly that's it: there's a shy loner with pet spiders that kill people. This could not have been riveting stuff in the drive-ins of 1976.

Spider-bitch is played by Suzanna Ling, who really should have made other movies because she was lovely and actually does a fine job in a role that asked for very little. The movie starts with creepy 70s shot-on-film scenes of a little girl wandering around in the woods and playing with spiders. Her name is Susan and her father is a mortician. Unfortunately, her mother is sick of spiders, sick of the morgue, and sick of her husband, which she announces angrily about five minutes in. She's also screwing Susan's cop Uncle and planning to kill off her husband. Little Susan overhears this and sics a tarantula on Mom, which kills her, although it seems to be via heart attack, which I suppose is intended to explain why nobody finds a spider bite on her. You can't actually die from a tarantula bite, although we know from The Beyond that they can eat your face, so that can do it. Here, everyone seems to die from heart attacks. Also, nobody ever seems to just swat the spiders that are crawling on them and making them have heart attacks.

Anyway, a few years pass and young Susan is a blossoming young woman who still likes spiders and is pretty hot, which makes it a bit odd that the local boys all pick on her. She does live in a mortuary and like spiders, but really! Her cop Uncle wants to bone her though, since he's lonely following the death of his brother's wife, but Susan's not having it.

Luckily, one Halloween night, a young boy gets up the courage to call Susan and ask her on a date. Naturally, Susan thinks her blossoming young vagina is going to experience the pleasures of a good pounding. Instead, some idiot dudes show up hoping to steal some coffins from her dad and bully her and, in the process, they kill one of her pet tarantulas and then chicken out and run away. Apparently, young men in the 70s had no game whatsoever- again, Suzanna Ling is a very hot chick and you stomp on her pet spider instead of trying to make time with her? Way to go, Horshack

After that, she has to kill anyone who figures out her secret, keep her spiders alive, and not get porked by her uncle. A few people die in some very painful ways, including a young girl who gets strangled in a scene that reminds me once again that a 70s PG rating was a lot different from a pussy 2010s PG. That's pretty much the movie. Susan doesn't exactly have a character arc and she even seems to forget about the spiders towards the end. It's all pretty tame stuff and probably could have played as a TV movie-of-the-week. Pretty dull.
Posted by Rufus at 8:22 PM