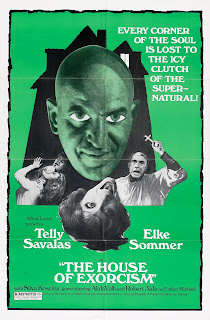 In some circles it would probably be blasphemous to review this version of the Mario Bava film Lisa and the Devils, which is cut up and reassembled into House of Exorcism, destroying Bava’s original vision in the process. House of Exorcism is definitely one of the weirdest money-driven mutations of a horror film ever to be produced. It’s about 2/3rds Bava’s original move and 1/3rd a whole 'nother plotline that was shot a few years later to capitalize off the Exorcist. In the process, at least twenty minutes was lost from Bava’s film and horror fans feared his original vision was lost forever until a full print finally turned up. That version is far superior to this one, but House of Exorcism is definitely one of the weirdest flicks you’re likely to see.

Bava’s original film was a dreamy, atmospheric gothic horror flick about a young student, played by Elke Sommer, on a class trip who sees the devil painted on a fresco and then runs into his double in an Italian workshop- played by Telly Savalas, naturally- before getting a lift that takes her to an old mansion with a screwed up rich family- Mom is blind, the Son (who strongly resembles Al Pacino in Scarface) keeps his dead wife in his bead, Telly Savalas is the butler, Italian exploitation stalwart Gabriele Tinti is the chauffeur, and everyone seems nuts. Meanwhile, the couple she hitched a ride from are bitter and the wife is screwing around, which isn’t terribly surprising since wives in Italian exploitation films are always screwing around. Before long, of course, people start turning up dead. In one particularly morbid touch, a dead body is too tall to fit in his coffin, so his ankles are broken. For some reason, Mr. Savalas makes dummies of people in the house, which explains what he was doing in the carpenter’s shop earlier in the film. 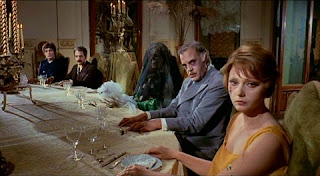 However, Bava’s film didn’t do very well in and nobody wanted to pick it up in the states. So, the producer added a long subplot in which Sommers’s character is possessed by the Devil and has to undergo an exorcism in the hospital. This is all used as a framing device: she gets possessed while on the class trip, taken to the hospital, and for no clear reason, relates the story of the mansion to the priest who is exorcising her. The possession here is actually more entertaining than the Exorcist: Lisa does acrobatics, delivers lines like “I am the asshole of the world!” (to which someone in the theatre yelled out “That’s !”) and turns into a hot nude woman (the priest’s dead wife or something) to tempt the exorcist. All of this is a straight up rip off of the Friedkin movie and only gets away with it by also being straight up batshit. Bava, nevertheless, objected to much of this material and walked off the movie, trying to convince Sommers to come with him! 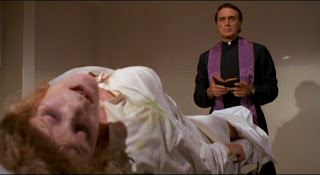 Even more confusing, the mansion story seems to be set in a much earlier decade, giving the impression that Lisa was reincarnated. Really, it makes no sense that she went through that whole ordeal and then went on a class field trip where she was possessed. And who the hell is Telly Savalas playing in this movie: the Devil, a doll maker, a butler, Kojak, or what? Even worse, the revamped version cuts entire sequences out and shuffles others around weirdly. As one moviegoer in the Vagrancy screening put it, when the film returns to the streets of towards the end, “What?! This makes even less sense now!”

It’s all ridiculously confusing and never really makes complete sense- sort of the David Lynch version of the Exorcist. If you go in with no idea that the film is actually a Frankenstein’s monster version of an earlier movie and an entirely different flick, you’ll feel like you’ve been taking drugs when you see it. But, that’s not exactly a bad thing.