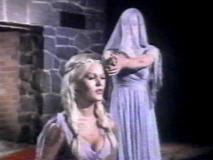 Man, is this movie boring! It’s also fairly stupid, but it’s not as if that’s stopped me before. In this case, though, I was checking the timer every thirty seconds and trying to resist the urge to fast-forward the whole time. Some people just like punishment.

Jump forward seven years and the sisters have gone about their lives. Judy (played by exploitation stalwart Claudia ) is a model having an affair with a politician’s son. Sylvia (Cheri Howell) is a prostitute, apparently. Penny (Roxanne Albee) is in a hippie religious cult. Diane is a sluttish hippie. Francie (Sherry Alberoni) is a wacky slut. All of them have received invitations to a seven year reunion. None of these back stories will come up again for the most part.

The reunion is certainly mysterious- two hired dudes show up and drive them to a secluded ranch that seems to be deserted. None of them seem terribly concerned about the totally inexplicable situation in which some stranger, who was clearly not in their sorority, invited them to a secluded ranch to throw them a reunion. Also, none of them have that shooting on their minds. Clearly, the filmmakers either thought that young women are really stupid, or just did not think the plot through; probably the latter.

The two dudes have hung around, hoping to get laid. The girls initially don’t believe their story about sticking around to protect them, because really what could there be to fear in an abandoned ranch where a mysterious stranger has invited you for a party seven years after the group of you killed a girl?

Long story short: Edward Clyburn (Arthur Franz) the father of the dead girl has invited them to el rancho to get revenge. There’s an electric fence around the ranch, blah blah blah. And he just sort of hangs out for the next half hour, playing a flute. Somehow he keeps hiding from the girls, who start dropping like flies. The hippie cultist gets strangled. One of the slutty ones gets stabbed. This also makes little to no sense because Clybourne is supposed to be trying to suss out the killer and her accomplice from the group, but killing off the girls doesn’t exactly help with that.

The movie has its moments, such as when one of the dudes brilliantly runs into the electric fence. There's also an inadvertently hilarious scene in which two girls argue over one taking a shower. “Francie, I really don’t think you should take a shower!”

“Cleanliness is next to godliness, right? So I figure, if I’m next to Him, Clybourne won’t get next to me!” She gets stabbed with a pair of scissors, thankfully.

One could maybe see where this could be suspenseful, but the direction is lackluster and the script leaves open vast expanses of nothing in particular happening. Also, the girls are so stupid it’s hard to care if they get killed. If you’re wondering (of course you are) there’s no nudity and the gore is minimal and more like ordinary effects than special effects. There was a surprise ending that actually was a surprise, but only because everything that went before was so unsurprising.