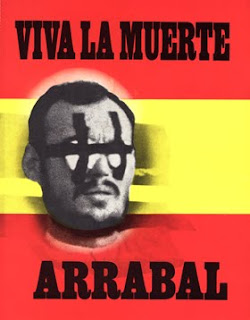 Viva la Muerte doesn’t seem like such a shocking film when you’re watching it, but afterwards, most of the storyline recedes into the distance of your memory and what’s in the foreground is plenty horrific. A surrealist classic about the deep psychological toll of fascism, Viva La Muerte is more horrific than most of the films discussed here because its terrors are internal as well as external- the film shows how fascism controls the body through state violence, while colonizing the mind along with it. There’s nowhere to escape.

Fando (Mahdi Chaouch) is a young boy whose father was arrested for treason during the Spanish Civil War. The film shows his laconic days with his mother, playing around the house, and finally coming upon information that he cannot quite understand: his mother turned in his father as a traitor, resulting in his execution. The family unit ate itself and the rest of the film depicts the boy’s fantasy world in a shocking and surrealistic style.

Made in 1970 by playwright and Jodorowski collaborator Fernando Arrabal, the film was shot in standing in for . It’s not exactly an overt attack on the fascists, who only make brief cameos riding around in a jeep playing official announcements: The war is over! Traitors will be rounded up and shot. If necessary, we will kill half the country! Viva la muerte! But the critique is deeper because the little boy’s psychological life is hopelessly corrupted, grim and ultraviolent- like fascism itself. 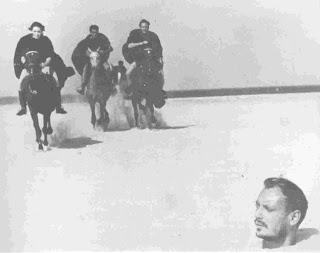 In a sense, Pan’s Labyrinth told a similar story about the fantasy life of children under Spanish fascism, but Guillermo Del Torro’s film is a bit too taken with its fantasy elements. Fando’s dreams are vulgar and horrific: his father is buried up to his neck in the ground and run over by horses, hooded and dragged, whipped, tied up in a cage and shit on by his wife, and shot by her with a cannon, naked children carry a dead body through the streets, the boy’s piss drowns the city, eyes are gouged out and eaten by a laughing general, a priest is fed his severed testicles, a pagan priestess covers the boy with spaghetti, and other horrors take place. Nuria Espert’s performance is unbelievable here- playing a mother wracked by religious and state-enforced guilt in one part of the film and, conversely, Mother Mary, and a lascivious bitch in the other, she flagellates herself, abuses her child, and in the most shocking scene of the film, rolls around in the blood of a cow killed and butchered on film and sews up a priest in its carcass, while passionately kissing him. 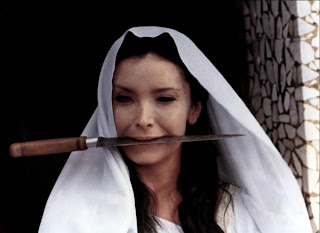 Some of the fantasy scenes are shot in a clearly fantastic style- colored lenses, possibly shot on video, and with children’s music playing. The boy’s burgeoning sexuality seems somehow mingled with death, warped by the world around him. The society seems fixated on pain and punishment and there’s a suggestion that there’s a continuum between the old Pagan rituals, their Catholic replacements, and the norms of Fascism. Everyone in the country seems fixated on suffering and vengeance. It is not a pleasant movie- many unpleasant things happen in the film; but filtering it through the eyes of a child serves to soften the shocks a bit and the surrealist atmosphere helps as well. It’s almost pleasant in places, but it’s lingering images and implications are deeply disturbing.