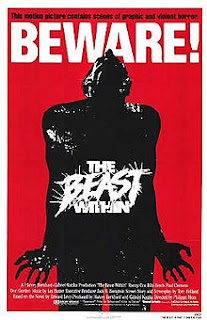 I saw The Beast Within when it first came out on video and I was but a horror-loving pre-adolescent whose parents paid no attention to what he was renting. All I remembered from it years later were some gory images, a particularly silly storyline (I could even pick up on that at age nine), and a transformation scene towards the climax that ODs on bladder effects. So, when I saw the VHS tape at Shock Stock, I had to pick it up. The verdict? It's a better-made film than I remembered and actually gorier, but it's still really silly.

Young Michael (played with conviction by Paul Clemens) is a medical anomaly. His metabolic system is in hyperdrive and he's lying in the hospital dying. His loving parents (played by Ronnie Cox and Bibi Besch) suspect that this has something to do with the hulking mutant that raped Mom after their car broke down on their wedding night, putting the beast within her, so to speak, and creating Michael. Hoping to help the boy, they return to the shit-hole Southern town where all of this took place and start asking questions that, of course, strike the town elders (who are seemingly all played by Sam Peckinpah regulars) as nosy. Meanwhile, Michael gets up and goes on the lam. Apparently, he's okay, except for his dreams about an old abandoned farmhouse with something locked in the basement and his need to kill people in gory ways. Puberty's a bitch.

In between getting painful headaches that cause him to kill and having these nightmares, Michael falls in love with a young girl named Amanda (Katherine Moffat) whose papa is an almost-comically goony redneck (John Dennis Johnston) and naturally wants to shotgun him. The parents, meanwhile, are discovering that this has something to do with this guy Billy Connors who raped the wife (and then died?) and the murders are connected because all of the people getting killed are from the same family. Also, Michael is apparently haunted by the cicadas whose life-cycle involves laying dormant for seventeen years and then shedding their skins. Like the dead rapist, Michael has a kinship with insects...

See what I mean? It's hard to discuss this plot without it getting silly. Because the big reveal is that Michael is sure as hell going to shed his skin and turn into a rubber monster, just like a cicada. We'll get to that in a second, but please see if this plot makes sense: Billy Connors was fucking some redneck's wife, so the redneck shot he,r and chained Billy up in the basement, starved him, and then fed loverboy her corpse. This, naturally, turned Billy into some sort of beast-man and he broke out, raping Besch and impregnating her. Her offspring, Michael, now, has the desire to kill off the members of the family that chained up Billy. So far, so good. Now, as he reaches seventeen, he's going to turn into a rubber monster and go on a rampage because his dead raping father loved cicadas- and that's where it gets silly.

The transformation scene, incidentally, is the highlight of the film with Tom Burman inflating Clemens's head like a rubber balloon. It's pretty cool 80s latex effects that will make you exclaim "fuck CGI!" if you're anything like me. It does require the suspension of belief that everyone basically stands around and watches this happen for an eternity without popping the kid's head with a pin. But, compared to accepting that the offspring of a rape turns into a cicada-monster, that's not much of a stretch!
In all fairness to the filmmakers, their film apparently got edited to hell by Universal and the original cut probably made more sense. The direction is pretty good and reminiscent of those old horror films where they tried to put you on edge through long, quiet scenes of people walking around dark buildings alone.
But, still, a movie in which the killer kid felt a kinship with cicadas would make sense and have a certain poetic logic to it- having him turn into a rubber cicada-monster via inflate-o-head? It's really hard not to find that a little silly.
Posted by Rufus at 11:48 AM