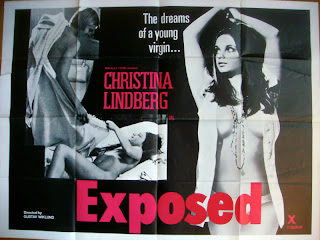 In the supplementary material on the DVD, director Gustav Wiklund makes no bones about his movie Exposed (Exponerad, also known in the US as "The Depraved" and the charming "Diary of a Rape") being "garbage," and that's pretty much right, but it achieves a certain haunting quality, probably in spite of itself, due to the lead performances and some of the weird turns of the plot. In general, I find many Swedish movies have this quality, and I can't tell if its due to the influence of Ingmar Bergman or the bleak weather.

I first heard of this film via its unbelievably sleazy trailer, which was included on one of Rick Sullivan's Gore Gazette trailer compilations. "In The Depraved, you'll see scenes that were never before put on film... The Depraved is banned in 23 countries because of its nudity and sexual activity... If you are shocked or embarrassed by total nudity and sexual activity you are urged not to attend. The Depraved is a film that had to wait for the permissive 1970s before it could be produced." Yowza! Did we mention nudity? Also, do you think anyone saw that trailer and took seriously the urging not to attend? You'll notice that the trailer makes the film look like the most... well, depraved movie ever made.

Is it? Nope, but it is plenty sleazy. The film tells the story of Lena (played by Christina Lindberg), a young girl who believes she has been blackmailed and forced into sex with strangers by an older man, Helge (), who she let take some nude pictures of her. The thought of what could happen to her if her parents or teachers saw those pictures is tormenting her and she seems to be severely cracking up. This is where Christina Lindberg's performance is pretty good. Some claim that Lindberg's popularity endures due to her large breasts and cute face. Having a deeper insight into Lindberg, I'd note that her ass is also beautiful, if only to elevate the discourse. Seriously though, she's got this disconnected and disturbed quality to her that works well in movies like They Call her One-Eye and Exposed- she looks like she's being victimized even when she's not. Of course, in most of her films, she is being victimized.

Here, Wiklund does something subversive with the narrative because it's never clear that Lena is being victimized. We see her in the beginning meeting up in a field with her boring boyfriend Jan who smacks her for her relationship with Helge, but are not clear about that relationship. Then she gets picked up by a nice and hilariously optimistic couple while their car radio announces her abduction and soon she hallucinates her rape at their hands. In fact, she's a bit like a perverse Walter Mitty because she's frequently imagining being raped or killed in various ways. The couple apparently just wants to hang out at her family cottage, run around naked, and fuck- my kind of people- but they also apparently have nothing to do with the story.

What's sort of interesting about the movie is that we're never clear about what the story is- is Helge a brutal pervert who's blackmailing and stalking Lena, as she seems to think, or is it that she was sexually curious, attended one of his orgies, let him take pictures, and now can't handle that he's in love with her and that she's clearly kinkier than she wants Jan to know? If you watch the movie with both options in mind, it's sort of an interesting take on a young woman's sexual psychology, wrestling with kinky urges in a placid society.

Or, it's just a badly-made movie whose narrative is confused. I do think we're supposed to be a bit mixed up about the plot because of all the hallucinations before we know what the plot is supposed to be, but you can never tell with these sorts of movies how much was planned and how much was created in the editing. Certainly, the pace of the film is weird anyway- after all, the first third of the movie is the subplot with the happy naked couple who then disappear and have no bearing whatsoever on the story! As you might guess here, the movie doesn't exactly hurry up and get to the point and it's not nearly as interesting as the trailer. But, again, there's some good psychological weirdness going on there and Lindberg is as lovely and naked as ever.
Posted by Rufus at 10:27 PM