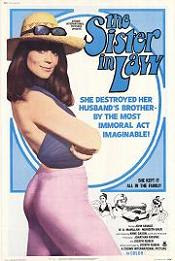 A lesson in exploitation movie marketing: To the left, we have the poster for the Crown International Picture "The Sister in Law", which bears the great ad line, "She destroyed her husband's brother- by the most immoral act imaginable!" If you saw this poster, you would think the movie was about a treacherous harlot who commits some sort of outrageous (likely sexual) sin in the movie, right?

Nope. The movie isn't at all about the sister-in-law destroying her husband's brother by any sort of immoral act. In fact, it's basically about a writer destroying his own brother by an immoral act while treating his wife, from whom he's separated, terribly. She's no harlot at all- I want my money back!
She is sexy though- Anne Saxon's performance here is enough to make you wish she'd done more movies. Her character is a wife whose husband has had some success that went to his head, resulting in him both moving in with a younger woman and getting deeply in debt with the mob. His brother, played by John Savage, returns home from time traveling the country and trying to find himself, and gets entangled in this sexual triangle by sleeping with his brother's wife and trying to seduce his girlfriend. Then the writer gets him running drugs to Canada for the mafia. It ends badly.

The Sister-in-law is a strange movie. It has some of the characteristics of an exploitation film: the characters get naked often, there's illicit sex and crime, and pretty shocking violence towards the end. But it's also a fairly straightforward character study with competent dialogue, acting, and direction by Joseph Reuben, who went on to make such great thrillers as "The Stepfather", "Dreamscape" and "Sleeping with the Enemy". It's got aspirations towards being a moral parable and everyone involved is giving it their all. It's also sort of wonky and strange in a way that actually enhances the quality of the film.
In the end, the characters are a bit unapproachable: the writer's a self-deluding prick; his wife should leave him but wants to hurt him; the hippie brother is self-destructive; and his girlfriend is a bit clueless. Now, I think that the characters are supposed to be this way- the film might well aspire to show people trapped in problems of their own making, in the style of Bergman. But it never quite jells- we don't really get to the deeper level of meaning that we do in Bergman, so we're just annoyed in the end at watching people do stupid things to destroy themselves.
Don't get me wrong: the finished product is not on the level of the European art house classics or the great American independent films of the 70s. But it's not remotely the sleazefest the poster promises. In a strange way, that's what's so great about that poster.
Posted by Rufus at 2:31 PM