First off, don't be thrown by the PG rating; this is more like a 70s PG, which means your parents can take you to see it at the drive-in and you'll be scarred for life. Some of us are old enough to remember being scared shitless by William Shatner fighting pipe cleaner spiders in Kingdom of the Spiders. They didn't worry so much about kids in those days- they'd lock us in the car while grocery shopping or smoke at the dinner table and think nothing of it. Or, at least, my parents did. (I remember Dad always used to say, "children are to be seen and not fed".) Anyway, nowadays, this one would be R rated easily for the melting people and eyelessness. Not to mention all the Satanic stuff. Back then, before that son-of-a-bitch Reagan got in the White House, they had us worshipping Satan at a young age. It was a different time. 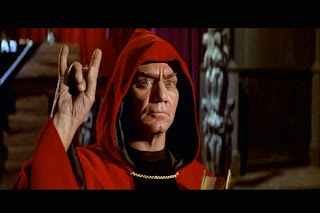 The Devil's Rain is one of a number of 70s Satan movies that followed the Exorcist, most of which involve convoluted story lines that assume some knowledge of theology (which is sort of the study of the ultimate convoluted storyline) and probably make more sense if you're Catholic. This film was written by three people, so it's safe to assume the storyline is convoluted. Luckily, the exposition is handled by Tom Skerritt and William Shatner, two of the finest actors of their generation.

Shatner plays Mark Preston, a man who fights the Devil. In fact, the movie begins with him going to fight the Devil, or at least the Devil's high priest, John Corbis, played with manic something-or-other by William Borgnine. I appreciated the fact that the movie began with things basically in progress instead of telling us more about Mark Preston. What do you need to know? He fights the Devil; just like his father fought the Devil and his father before him fought the Devil. In fact, his father shows up in the first few minutes to melt into a waxy goop after telling his son that he has to go fight Corbis again. He's polite enough to melt on the front porch instead of on the new rug inside.

So, Preston goes off to confront Corbis in the old Satanic church in a deserted Western ghost town. Look, I know what you're going to ask here and I have no fucking clue why they're located in a deserted Western ghost town, and after we hear their backstory (they were burned alive in New England pilgrim days) it makes even less sense that they'd be in an old wild west ghost town. But there you go- Wild West Satan Worshippers. The Devil worshipping ceremonies, incidentally, are totally legitimate- you know this because Anton LaVey, High Priest of the Church of Satan, served as a consultant on the film, surprisingly the only time he and Shatner ever worked together. (Shatner and Satan worked together for many years until they had a falling out in the 80s) LaVey also appears as a priest in a paper mache helmet that makes him look like a Satanic tit.

There's a lot of mumbo jumbo and the gist of it all is that, when the Devil gets your soul, you lose your eyes- a super creepy makeup effect by the Berman family- and look sort of waxy. Shatner's parents get the treatment and go missing and then he gets the treatment and goes missing. So, his brother (played by Skerritt) and his brother's sexy psychic wife (Joan Prather) come looking for him. The good for nothing Sheriff refuses to help (although he does drive out to the ghost town in order to inform Skerritt that the police will not actually search the ghost town; police in this area apparently being very selectively lazy), so they go themselves to wage war, enlisting the help of their teacher Dr. Richards (played by Eddie Albert, also slumming it). 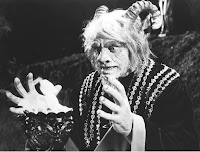 There's a whole subplot with the "Devil's Rain", which is sort of like a giant Faberge egg with souls inside as well as rain- it apparently can kill Satanists, which is why they keep it in their Church, like the Wicked Witch with that bucket of water. Also, the Devil possesses Borgnine repeatedly, turning him into a goat-man. From one angle, none of this makes a lick of sense, which was a complaint audiences had at the time. From the other angle, mine, it's all awesome as hell. That angle, of course, is also drunk, so take it how you will.

Anyway, the convoluted storyline turned off viewers and the negative critical response effectively killed the career of director Fuest. Sadly, it did not kill the career of newcomer John Travolta (thanks a lot, Satan!) who has a small part. It's also a shame because the movie has a sort of nutty charm and would probably play well on a big screen to the right audience. I have no idea if it would play well with satanists though.
Posted by Rufus at 10:57 AM