William Sanderson looks like the sort of devious low-level hoodlum who would be arrested for disturbing the peace or selling stolen packs of cigarettes. In his other genre entry, Savage Weekend, he played a backwoods stalker type; his country creepiness was played for laughs, however, on Newhart where he was Larry with two brothers named Daryl. All kidding aside, he's a very versatile actor. In Fight for Your Life, he plays an escaped convict/hostage taker who is also incredibly racist, and you have to wonder if he doesn’t leave this performance off his resume.

By definition, exploitation films need something to exploit- mostly they reach for sex and violence- that can't be found in mainstream movies. One approach is to exploit some dicey social issue that Hollywood won't touch; about a dozen 60s exploitationers feature a character's back alley abortion, and Sam Fuller was a regular maestro of racial/ social tension melodramas. Fight for your Life pokes at the open sore of racsism in America, so much so that it was the only "video nasty" to be banned in Britain due not to violence but racist dialogue. 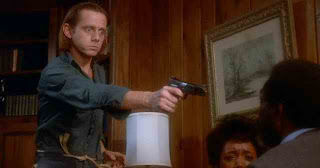 Legendary exploitation producer William Mishkin brings us this sleazy little melodrama, directed by Robert A. Endleson, whose only other film was the porn satire The Filthiest Show on Earth. Endleson is apparently not proud of Fight for your Life, although it’s a competently-made movie that moves fairly well. The story is about three escaped convicts- Kane (Sanderson), Chino (Daniel Feraldo), and Ling (Peter Yoshida)- who take a family hostage and torment them before the tables are, inevitably turned. The twist is that the family are middle class blacks and Kane is virulently racist and spends a good third of the movie tormenting the head of the family (played by Robert Judd) by making racist jokes, forcing him to tap-dance and play to old racial stereotypes, and generally attempting to win the Ku Klux Klan image award. Chino, meanwhile, is a somewhat colorless Hispanic, aside from inexplicably insisting on eating with his hands, and Ling is a Chinese psychopath who giggles constantly. They’re sort like a Benetton rainbow of offensiveness.

The Turner family, meanwhile, are the picture of assimilated black domesticity. The patriarch Ted (Robert Judd) is a preacher; his wife (Catherine Peppers) still doesn’t trust whites but daughter Corrie (Yvonne Ross) has a best friend Karen (Bonnie Martin) who’s not only white but dated her now-dead brother Val (Ramon Saunders); Grandma (Lela Small) is a feisty old lady in a wheelchair; son Floyd (Reginald Bythewood) is a feisty kid who wants to be Muhammad Ali when he grows up. None of this would be out of place on a sitcom from the 70s and I kept expecting the little kid to have a sassy catchphrase.

It's been called the "most politically incorrect movie ever made", which is a claim anyone who's seen Birth of a Nation would protest. It's also been called a "racist movie". Is it a racist movie? I don't think it is. Granted, it has more racist dialogue than twenty episodes of All in the Family. But it's pretty clear where the filmmakers' sympathies lie- Kane, the racist character in the film is a wretched creep who seems to be made out of pure oil, while the black family are clearly virtuous folks in distress. I’ve said before that the grindhouse films were very much of their times and that might apply here. Racism is still shocking but an interracial love scene might have still packed a punch in 1977 that it doesn’t now. But, to my mind, a racist movie is one that portrays its minorities as mostrous- in a way that an actual racist would approve of- and there were more than a few of those in the 70s and 80s. Check out the oeuvre of Charles Bronson sometime for a slightly creepy, often hilarious look at how reactionary whites see urban-dwelling minorities. I'm not saying Bronson was a racist, but damn he knew where his bread was buttered.

The problem with Fight for Your Life isn't that it sympathizes with its racist character- more that it plays the race card to get a rise out of the audience, but then doesn't know where it wants to go. Once you get over the shock value, it's sort of a one-note affair and it keeps playing that note for at least half the running time. The bad guys are really bad and the good guys are really good, and very little happens to complicate our understanding of them. The question, as with every movie in the Straw Dogs home invasion/revenge mode is: How much does it take to turn an average man into a killer? Judd’s performance is great, but it’s fairly hard to believe that the family is in mortal danger from Kane who, again, looks like he’d be run in by the cops for loitering. Ling is a bit more frightening and has one of the truly shocking scenes in the film when he beats a child to death with a rock. However, none of the thugs seems truly menacing enough to keep the family hostage.

The payoff, meanwhile, is a bit muted. All three goons get wasted, but it seems unsatisfying. The movie builds up to a climax that doesn’t quite arrive. Terrible as it sounds, we’re expecting the family to torture the three to death, but for the most part, they’re dispatched quickly. Something about the hostage revenge scenario never quite worked for me and I think it’s the combination of the hostage crisis never seeming like a crisis and the revenge never seeming like revenge.

William Lustig has released the movie on DVD and claims to love it, and it does have a fairly solid plot while pushing all sorts of social buttons. With the exception of a maudlin (and hilarious) flashback that lets us know how much Carol misses her dead boyfriend even though she’s a completely minor character, there’s not too much superfluous material here. And aside from the thugs doing everything imaginable to get caught, most of what happens is realistic. But it’s not exactly edgy, which you expect from these dramas. Maybe if you saw it in a multiethnic group of friends whom you didn’t want to offend there might be some anxiety, but otherwise the movie doesn’t supply much in the way of tension.
Posted by Rufus at 3:50 PM