Cannibals in the Streets was also released as Cannibal Apocalypse and Invasion of the Flesh Hunters, two titles that are a bit generic and don’t really capture what the movie is about. Cannibal Apocalypse was probably meant to confuse people who thought they were going to see either Zombie Apocalypse or Cannibal Holocaust, but a grand total of about ten cannibals in the movie doesn’t really make for much of an apocalypse, and it doesn’t make for much of an invasion either. This is not to say it’s a bad movie. In fact, I think it’s been disserved by its generic titles and has never gotten the love it deserves.

The movie is about a handful of vets who return from Vietnam with some sort of rabies-like virus that drives them to commit acts of cannibalism. John Saxon plays Norman Hopper, a former Army captain who is trying to suppress his own urges to bite people and fit back in to civilized life, something made particularly difficult when the sexy babysitter who keeps flirting with him hikes up her skirt and lets him go down on her. Apparently, he just nibbles her a bit, something she takes as a new kink, but how long can he hold out for? Meanwhile, his lovely wife is being courted by a doctor friend who is in charge of observing the troubled veterans from Hopper's unit, something that would make anyone want to go bite somebody. It’s a bit like the Italian cannibal film version of The Deer Hunter.

Even more troubled is Charlie Bukowski played by Giovanni Lombardo Radice, who has a great “disturbed” look that he put to use in The Gates of Hell (a.k.a City of the Living Dead) as the disturbed town crazy Bob, and Make them Die Slowly, in which he was really more of a cokehead, but did get the top of his skull lopped off with a machete, which is pretty disturbing. Here he has a great sequence in which he goes to see an afternoon showing of a war film- both an ironic commentary on the subject matter and a reference to May Heatherly, who appeared here as an infected nurse and in the film showing, From Hell to Victory. The film does not disturb him, but he is disturbed by the couple making out in the row in front of him.

Seriously, if you’re going to lay back and let your boyfriend suck your tits in a movie theatre, you’ve got to expect some trouble, but Charlie goes a bit too far by biting her neck. The girl screams and an angry mob of bikers dressed like Eurotrash (the movie is set in Georgia, but filmed by Italians) chase him into a thrift store where there’s a tense standoff with the police, only after he gets chased around the store by a motorcyclist and kills him and then kills the security guard who came running for the gunshots, but not for the motorcycle riding around the store. After a tense standoff, the police take him in. I’ve heard some reviewers complain that the story is slow-moving, but in the first forty minutes, we’ve already had a Vietnam battle sequence, pussy-biting, neck biting, a motorcycle chase, and a police standoff. What more do you want? 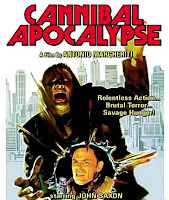 It does lose a bit of steam in the middle, as the police (led by the great grizzled Captain McCoy played by Wallace Wilkinson) and the hospital try to figure out what’s going on and Saxon tries to hold it together and keep his wife from leaving with that prick doctor. Luckily, before very long, the cannibals under observation, Charlie and Tom Thompson (Tony King of the Buffalo Bills and Shaft), plus a nurse they’ve infected, escape from the hospital with the intention of reliving their Vietnam experiences and actually flying back to Vietnam, where they’ll ostensibly be permitted to bite whoever they want. First, however, they have to duke it out with that motorcycle gang, who’ve apparently been waiting outside the hospital to jump Charlie for killing their comrade, and flee from the cops into the sewers; as the grizzled Captain puts it, “ashes to ashes and shit to shit!”

The movie reminded me of two earlier genre pictures, Deathdream(1974) and Rabid (1977), and the general perception that this it’s a rip off might be another reason that Cannibals in the Streets has lacked appreciation. In some ways, it’s a smaller scale Rabid and somewhat more effective as the domestic setting of the first half has more resonance- Saxon’s character is trying to hold it together even as he knows he, “hasn’t been the same since coming back from Vietnam.” In fact, the movie plays as an effective little parable about the war wounded who could never quite readjust to civilian life with the psychological scars they brought back, and how those mental illnesses consumed their loved ones and finally the larger society. It’s a bit how Romero’s First Blood might have played.

I’ve often said that social commentary plays best in horror movies when it’s couched as a parable, instead of delivered through didactic speeches. Here, the commentary seems fully intentional (the director Antonio Marheriti said as much), and there are lots of nice little touches- for instance, I love a shot in which a character dies in military uniform beneath a toy airplane with the letters U.S.A. hovering above his head. And yet the story can function just as easily as an Italian Romero rip-off, should you choose to take it as such. Either way, Saxon’s performance is much better than average. And, whether you take the film as a biting social commentary on the Vietnam War, or a movie about cannibals running amok, it’s got enough gore, action, sleazy sexuality, and scenery-chewing dialogue to qualify as fully entertaining.
Posted by Rufus at 10:24 AM