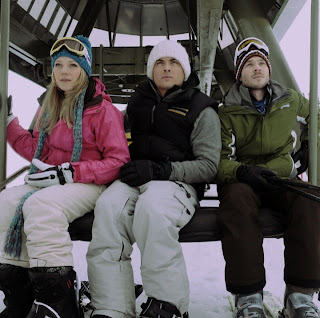 Basically an extended riff on “what would happen if you got stuck on a chair lift at a ski resort? and they closed for the week? and then there were wolves below? huh?”, Frozen is pretty scary for a movie about three people sitting in a chair for a few days. It’s also educational- I learned quite a bit about frostbite, wolf packs, and ski lifts- particularly that they all can suck.

Adam Green previously made the film Hatchet, a movie that suffered from what we can call the "Quentin Tarantino Law": if a filmmaker has seen all of the same exploitation movies you have, your enjoyment of their own movie will diminish in direct proportion to the number of times they reference them. Hatchet was less a slasher movie than a mix tape of cool things from actual slasher movies and considerably less enjoyable than it was intended to be.

So it’s a relief to see Green crank out an effective movie that is actually somewhat original. The three characters are young college kids (they’re always college kids, aren’t they?) who are on a ski trip together. Dan (Kevin Zegers) has a girlfriend Emma (Parker O'Neil) and a pal (Shawn Ashmore) who is clearly feeling like a third wheel and acts like a bit of a douchebag as a result. I’m not sure that filmmakers realize how often sarcastic characters start seeming like dicks- maybe it’s something with college kids today actually being dicks, but I don’t think so. I suspect the point is to build tension between the characters and then get them stuck on a ski lift. But, we’re not exactly talking an Ingmar Bergman level of characterization here.

Actually, the ski lift is the most developed character in the film. The lift is way off the ground, so jumping is a bad idea, very cold which leads to some really gruesome skin irritations, and fairly rickety. I was truly glad that the filmmakers realized it would be much more effective to film a real ski lift and not a lift in front of a green screen- this added a layer of realism to the proceedings. You can really tell they’re way up there. And there was a nice attention to details. Did you know that the wires holding those things are razor-sharp so it’s difficult to swing across them hand over hand? Apparently this is true. Did you know that frostbite itches, but you can’t scratch it without removing your skin? The film is educational!

Green has since made another Hatchet film that was booted from theatres because it was too much of a niche movie and the economics of the multiplexes are brutal. It’s a shame, but I’d much rather see him do more movies like Frozen and someone figure out a way to put the multiplexes out of business.