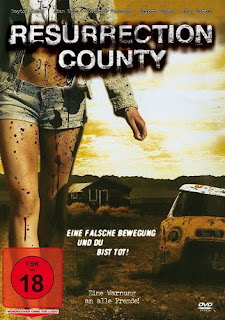 Ah, rednecks- they've been the staple of many horror films ever since The Texas Chainsaw Massacre forced us all to consider how terrifying it might be to share dinner with them. In this direct-to-DVD survival flick we're firmly in the backwoods of Creepy County, where the radio only plays fire and brimstone preachers with molasses-thick accents and the general stores sell chewing tobacco right next to the sleeveless flannel shirts.

And wouldn't you know it? The off-roaders ride right onto trailer trash land. There's a melee, a ruckus if you will, and one of the hicks winds up dead bringing a whole mess o' trouble down on our heroes. If none of this sounds very original to you, you're right. Just like in Texas Chainsaw, the hicks in town all know each other and work together. And they're led by a menacing preacher straight out of Night of the Hunter. The only thing missing is the child-like, pregnant hillbilly girl whose baby is clearly a product of incest. Maybe in the sequel. As Iwas watching the movie, I kept thinking that the only two groups you can make fun of with relative impunity are rednecks and Italian Americans. You would have problems if this film was about kids running afoul of inner city blacks, although that was the plot of nearly every Charles Bronson film in the 80s.

Also, I'm sort of old school; I can't look at anything on digital video without thinking of cable access. Resurrection County doesn't escape any of these problems, but it does have a certain je ne sais what the fuck that is enjoyable. The acting is serviceable with Robert Miano's Parson character being a standout. And it gets some mileage out of the Wolf Creek tactic of being meaner than expected. So, it's worth a two dollar rental. Just don't believe the crap on the box about it being "horrifying".
Posted by Rufus at 6:05 AM