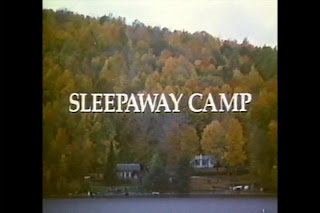 Today hailed as a “cult classic”, which is really just a nice way of saying, “a bad movie that’s also sort of weird”, Sleepaway Camp was originally just another Friday the 13th rip off- a movie that honestly doesn’t seem too original itself if you watch it directly after watching Halloween. However, what distinguished Sleepaway Camp from the horde of slasher flicks of the era is that although the movie has all sorts of flubs and problems, it’s just sort of weird, particularly in its bizarre ending and homosexual subtext. I think people remember it for years just because they’re still asking themselves, “What the fuck was that about?”

These movies usually begin with a series of tragic events that happened in the past. In this case, eight years ago some dumbass kids from the local camp were dicking around in a motorboat in the lake when they ran over some kids with thick New Yawk accents. Sample dialogue: “Peetuh stahted it!” “Did not, you lie-uh!” The father is killed and one of the kids dies and whoever survived something like that would probably be a homicidal maniac, right? Probably so.

Anyway, flash forward to eight years later and the survivor, Angela, played by Felicia Rose, is heading off to camp with her cousin Ricky (Jonathan Tiersten), chaperoned by his nutty mother (Desiree Gould) who behaves like Little Edie in Grey Gardens with another couple more screws loose. She’s somehow secured physicals for the two kids without taking them to a doctor and we soon realize that there’s something wrong with Angela. She doesn’t eat, hardly talks, stares a lot into the distance and seems more than a little disturbed. Felicia Rose was a new actress but already played creepy well. She’s pretty much the best part of the film. 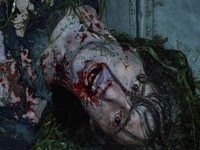 When the kids get to camp, Ricky has to protect Angela from the abusive fellow campers, particularly the cuntish Judy (Karen Fields) and the bitchy counselor Meg (Katherine Kamhi). There’s also a weird love subplot in which Angela can’t fool around with the one boy at camp who likes her because she once saw her dad and another dude getting it on. It’s sort of a shitty camp anyway: one of the cooks openly jokes about molesting the pubescent campers, the counselor abuses Angela, Mel (Mike Kellin), the owner, covers up the inevitable killings and beats up Ricky suspecting him. And, naturally, people start getting killed off one by one: the pervert cook gets boiled alive with a huge pot of water, one bully kid gets drowned, another bully gets a hornet’s nest dropped on him while he’s taking a “wicked dump”, and so forth. The effects, by Ed French, are pretty much Savini-level, which helps a lot. 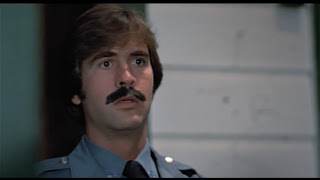 There’s supposed to be a mystery to this, but for the most part, we know who’s doing it the whole time. The one twist is a shock ending that actually is shocking if you haven’t heard about it already. Otherwise, what distinguishes the movie are a bunch of weird touches: the gay dad flashbacks, a skinny dipping scene that amounts to a bunch of naked dudes and clothed girls, that weirdo Aunt, a cop with a painted-on moustache, and the child molesting cook that nobody worries much about. There’s a really weird subtext too- Angela, let’s face it, is basically a closet case. Is the film warning of the dangers of closeting? Because I got the feeling at points it was just warning us about homosexuals. What was the deal with that hallucination anyway?

In the end, it’s weird enough to puzzle over, but not a very good movie; only worth seeing once, and probably not even that many times.
Posted by Rufus at 7:14 PM