Holy shit! David Hess actually appeared in a movie that’s enjoyable to watch. After the plodding misogyny of House on the Edge of the Park and the overrated crappiness of Last House on the Left, I was wondering if everyone’s favorite cinematic scumbag rapist ever acted in anything decent. Indeed he did- Autostop rosso Sangue, known in the US as Hitch-hike is good twisted fun. Is it any surprise that he plays a scumbag rapist kidnapper here? 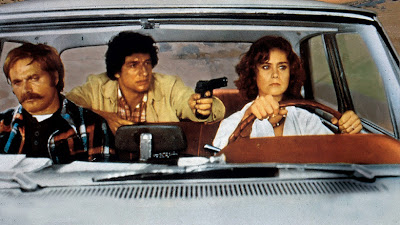 Basically, Hitch-hike is a cat & mouse movie in which three different characters are trying to be the cat. A bickering husband and wife get abducted by a hitchhiker while traveling across the American west (or its Italian equivalent) and each of them vies for power over the other two while weird psychosexual charges are exchanged. It’s a bit like an exploitation flick version of “Who’s Afraid of Virginia Woolf?”.

The husband, an alcoholic Italian writer (played to the hilt by Franco Nero, Django himself) with a rich wife, compensates for his feelings of personal failure by abusing his wife mercilessly. The dubbing, by Nero himself, is of the Whatsamattayoo? school of Italian English making his constant attempts to paw or insult her much more amusing than they should be. He’s easily the worst male chauvinist since Gabrielle Tinti in Velluto Nero and makes one wonder how bed gender relations really were in 1970s Italy. Seriously, the guy is a charmer!

The wife (played by Connie Clery of Moonraker), meanwhile, is way out of this schmuck’s league and clearly knows it. One of the major themes of the movie is that she has a sexy body and the camera takes it in as often as possible. Her dissatisfaction with her drunken lout of a husband explains why she picks up the sketchy looking hitchhiker (played by David Hess) to piss him off and why she seems to flirt with the idea of letting him have his way with her once he takes them hostage. Maybe she likes the attention and maybe she just likes hurting hubby.

Hess, meanwhile, plays a psycho bank robber who wants to get away with his money, humiliate the husband and screw the wife, and possibly get the lout to write a book about him and become famous! The writer manipulates his desire for fame, while also humiliating him for having escaped from a loony bin. And the wife seems to hate him, but maybe hates her husband more and maybe likes the sexual attention from this creep.

In a mainstream movie, these tensions would play just beneath the surface with little coming of them. Luckily, this is Italian exploitation so Hess ends up tying up the husband and fucking his eager wife right in front of him before she comes back naked with a shotgun to blow him away! There’s also a crazy truck and camper chase straight out of Duel, rivals from the bank robbery gang who want the money, and an ultra-violent twist ending. The movie works wonderfully at maintaining the tension and paying it off with sex and violence. It’s also a good example of how entertaining it is to watch completely amoral people trying to overpower each other.

Update: Here's the trailer with the great Ennio Morricone score as well as the sex scene with Djano crying. As if it's not hot to watch your wife fuck someone else. What??? Just saying.