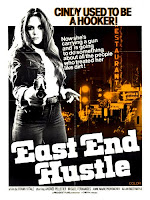 Young Maryanne (Ann Marie Provenchier) grows up in relative poverty with four siblings, a fatso dad who wears dirty undershirts and smacks the kids at the breakfast table, and, worst of all, a ridiculous Quebecois accent. Sleazy dudes hit on her on sidewalk corners and she works in a textile sweatshop where the boss regularly expects her to screw him. In addition, the bossman decides to rent her out to some pimp friends. The opening scenes of East End Hustle have a suitable aura of sleaze although their languid pacing is a bit off-putting. For some reason, the criminals all speak in a low voice that sounds like they’re on Quaaludes. It’s hard to fear them pimp-slapping young Maryanne when you’re worried that everyone's about to fall asleep!

Luckily for her, and us, she’s saved before doing actual escort work by an avenging hooker angel, Cindy (Andree Pelletier), who is leaving the life behind and who also talks in a thick Quebec accent. “’Ey! Geet in my car ovuh dere!” Ah, the classic days of Cinepix Canuxploitation; back when anyone who wanted a good tax write-off could fund a Canadian exploitation movie and American viewers could try to figure out why the inner city had so many signs in French.

Who knows if it’s a pointed detail that the head pimp, Dan (Miguel Fernandez), sounds like he’s from Brooklyn while the hookers all sound French Canadian. As a pimp, he’s pretty tough and starts bumping off the girls who rebel against him. Weirdly though he talks in a low, steady voice like a librarian. Maybe his boring gelding demeanor sapped the glamour out of hooking for Cindy, who has come to the wisdom: “When your pussy goes for money, something else goes too.” So true. The movie does a decent job of detailing the dynamics of the stable of whores with plenty of nudity, sleaze, and over-the-top dialogue, my personal favorite being a hooker who responds to her dress being torn with, “’Ey yoo! Oh fookin’ shit!!” It might have been more fun if they’d just stuck with that: sort of Car Wash with escorts. 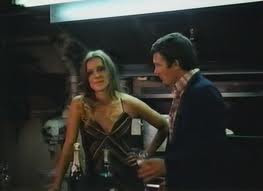 Alas, Cindy becomes a sort of vigilante, pulling a knife on the hoodlums who harassed Maryanne in the opening when they try to pick up the girls and leaving them sans pants in the middle of the street. She’s still in trouble with the mob and Dan the evil pimp tries to send her a message by dispatching his goons to rape her in a public restroom! This starts her on the path to lead a hooker revolution against the evil pimps via an underground railroad of shitty Montreal houses. The mobs take her groggy boyfriend hostage, which doesn’t seem to upset him greatly. But we know this can only end in violence.

The violence does come in the form of some NYC hitmen who slit some throats and send Maryanne down three stories of an open townhouse to her death. The filmmakers clearly know what their audience is looking for with nice gratuitous touches like establishing Cindy’s relationship with her boyfriend via a hot, graphic sex scene. At times, it felt more like a straight sexploitation flick than a revenge epic. The violence is somewhat graphic too, although less so. But there are probably enough sleazy plot points to satisfy a not-too-discriminating exploitation hound. If you’re watching the movie, you’re probably hoping to see boobs, bush, blood, and bad 70s clothes, and it has that in abundance.

The weird thing about the movie, aside from the Inspector Cluseau accents, is the thing with everyone speaking like they’re trying not to wake someone asleep in the next room. Cindy keeps double-crossing the pimps but they don’t seem very angry. They’re looking to kill her, but she doesn’t seem very scared. The soundtrack is full of generic late 70s soft rock, which doesn’t help much. And, as with many of these movies, the characters aren’t well defined beyond what they’re doing; Cindy is the ex-hooker taking on the mob and not much more; Dan is the evil balding pimp; Maryanne is the wimpy young hooker; etc. The languid and subdued tone really goes against the main appeal of these movies: namely, watching a kickass female get revenge on her male oppressors. Cindy is no Pam Grier, that’s for sure. The easy joke here would be that Canadian action heroines are more boring than American ones, but after living here for eight years, my opinion is that Canadians are plenty interesting, although with an English reserve. But it is possible to be a bit too mellow in your vengeance seeking.
Posted by Rufus at 8:12 PM