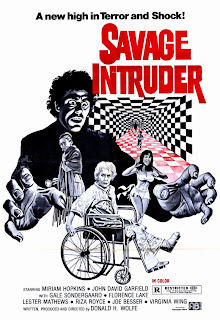 The Savage Intruder starts with a great credit sequence of the decrepit and rotting Hollywood sign panning down to a severed head and hands lying in the dirt below. It's a nice visual commentary on a Hollywood studio system that knows where to bury its bodies. Also, it introduces us to a serial killer who is slashing up older women in the Hollywood Hills, which makes sense because the young ones run away a lot faster in the usual slasher flick. It's a wonder nobody thought of this before. He's played by David Garfield, son of screen legend John Garfield, and we see him follow an old lady home from a bad and cut her up in her bathroom early in the film so there's no mystery about that. The opening scenes, though, are both pretty grim and gruesome, setting up a tone that the movie doesn't really maintain.

Instead, the film shifts into Hollywood Boulevard/Whatever Happened to Baby Jane? mode as the young punk slasher, Vic, turns his attentions to aged former movie star Katherine Parker, played by real life elderly ex-movie star Miriam Hopkins (from Dr. Jekyll and Mr. Hyde among others). Her glory days solidly behind her, now she spends her days in a vast and creepy mansion drinking heavily and imagining she's at the gala balls that have since ended. Introducing himself as Laurel N. Hardy, the hippie slasher gets a job as a personal assistant for the old biddy, which we know won't go well.

The movie plays up the arrogance of the 60s generation against the decrepit glamour of 1930s Hollywood. Vic gets under the skin of the house matron played by Gale Sondergaard and into the panties of the Asian maid Greta who he calls "my little fortune cookie". He also shoots up and hallucinates about running down a cool endless day-glo checkerboard hallway to a room where his mother is having a sexual rendezvous with five guys before the child Vic chops her hand off with a hatchet. Mamma was a whore and a lush and now Vic kills older matronly women- Freud would get it. Throwing a spanner in the works, Katherine jumps his bones and falls in love with the young punk. Cue the acid rock! 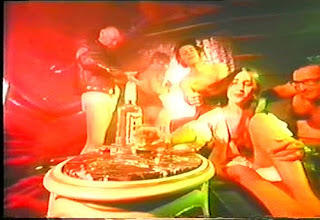 So psycho Vic's plan is to turn the old bat into a sugar mamma and he's willing to kill anyone who gets in his way. Instead of being a "savage intruder", he's really more of an opportunist with a psycho streak and a genuinely creepy character. Katherine, meanwhile, is a delusional alcoholic in the Gloria Swanson mode. She was always big; it was the killer hippies that got small! Things get sufficiently gory in spots and really weird in others. In one great sequence, Vic takes Katherine to a hippie drug party where she encounters a drug pushing midget, black and gay stereotypes, crazy wallpaper, and the cast of Laugh-In basically. In another, she gets drunk at the late night Christmas parade and bitches to a television reporter about the "queers" on Hollywood Boulevard.
For about the first hour, this contrast between the psychedelic generation and the older lonely booze hound works pretty well. Like The Night God Screamed, the older set's fears about the hippie creeps are totally justified here! The gore effects are surprisingly good, considering it was filmed in 1969. Eventually, though, it starts to run out of steam, right about the point Vic starts holding Katherine hostage. The last half hour really repeats itself. One also the unmistakable feeling of having seen all of this before in some classic movies. Also the last half hour really repeats itself. (Ba-dum-tish!) Anyway, it's still worth a rental if you've ever wanted to see a gorier drug era version of Whatever Happened to Baby Jane?. Actually, it's not on DVD, so you'd have to find a place that rents VHS, or rents movies at all anymore. God, now I feel like an old timer!
Posted by Rufus at 2:46 PM