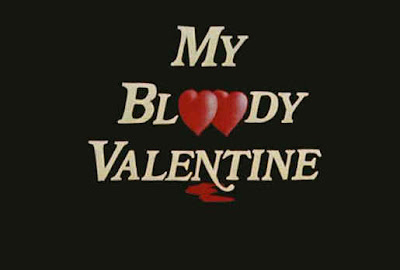 After I moved to Canada, I learned a whole other way to look at movies: are they openly Canadian or secretly Canadian?

A ton of movies are shot up north, either by American or Canadian production companies, and the difference seems to be between ones like Juno or Meatballs that don't acknowledge their Canadian parentage, and those like The Fly that don't exactly hide it, which stirs the pride of Canadian genre fans. My Bloody Valentine is an example of the latter: on more than one occasion, I've heard it described as the "Canadian slasher movie". Now, having first watched the movie in America, I never noticed that it isn't set in an American town. It always looked that way to me. But, for Canadians, it's obviously set in Canada. Basically, the accent that Americans can't quite place is from the maritime provinces instead of New England, and it actually is meaningful that everyone drinks Moosehead in the film- very meaningful. This is what Canucks see as most characteristically and unmistakably Canadian- the beer!

So, I'm going to take their word for it. My Bloody Valentine is a slasher film set in a working class Canadian town (obviously!) defined by its coal mine. Years ago, there was an explosion in the mines that made one the one surviving miner eat his dead colleagues and go crazy (and one thing is for sure about slashers: they just can't let shit go!), and so he put on the scary miner outfit and started a killing. He killed the foreman who left the mine early for the Valentine's Dance and killed the dude on Valentine's Day and he has a thing against the Valentine's Dance (another thing about slashers- they pick a holiday and really watch their calendars!). Now it's the 1980s present day and they're thinking of holding another Valentine's Dance. Those damned fools!
On top of this, you have a love triangle going on. T.J. left the shit hole town for California (no mention is made that he went to another country. Just saying) to make it big as a professional flautist (just kidding) and now he's back with hat in hand to work in his dad's mine. Lisa, his old girlfriend has since shacked up with his old buddy Axel, and now she can't decide which dick she wants. So the two friends are fighting over her throughout the movie, pussy being scarce in Nova Scotia, and meanwhile the Mayor and Sheriff are trying to handle the series of killings that just keep happening and trying to find out if that crazy miner is still in the mental institution or not. 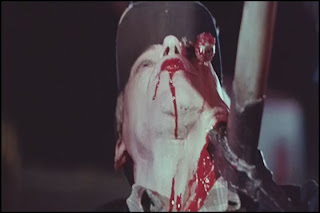 A lot of people say that My Bloody Valentine is their favorite slasher film and I can see the appeal- you've got a good small town romantic drama set in a working class milieu, a clever psycho on the loose story, and lots of nifty gore effects by Thomas Berman and his crew. The effects, incidentally, were only recently released via Lion's Gate DVD; the original film was hacked to bits by the ever-cowardly Paramount Pictures in order to appease the MPAA. There's also a great folk song about the killer over the end credits. And, frankly, after all the dumb suburban brats getting killed in slasher movies, it's fun to see blue collar kids with blue collar problems for once.
The problem, for me, is that the killer looks cool, but he's yet another faceless psycho for the most part, and the main characters, while not as insipid as the usual slasher victims, aren't that interesting. I don't really care which dick Sarah chooses, although we all know she's going to pick her first love in the end. Ultimately, slasher films are hard for me to get into because they're so formulaic that I know exactly what's going to happen next for 90% of the running time. I'll agree though that My Bloody Valentine is much better than average (unless your average is Halloween). Way to go, Canadians!
Posted by Rufus at 2:52 PM