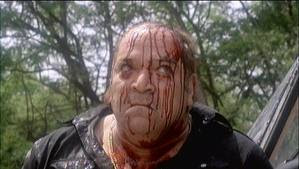 Jungle Warriors begins with overhead shots of a jungle, appropriately enough, and a rock song about needing "your heat" that is notable mainly because the singer, Marina Arcangeli, could kill small animals solely with the power of her horrific singing. Soon we're watching a gang of guerrilla rebels blast up a jungle camp at the bidding of drug lord Cesar Santiago (played by Paul Smith, Bluto himself) who tortures a dude, promises to protect his family and then snaps his neck very unconvincingly. As if Smith isn't a great enough villain, he has a femme fatale sister Angel, played by 80s B-movie queen Sybil Danning, who's apparently sharing bodily fluids with him.

Into this domestic drama tromps a bunch of 80s fashion models with big hair heading into the jungles of South America to do a hot photo shoot that looks to be in la mode de Sears. Their annoying manager, meanwhile, tries to pick up South American chicks with 80s pickup lines like, "I got Quaaludes, I got cocaine... any game you can name, any amount you can count." As if this wasn't enough brilliance for three movies, John Vernon shows up as a Chicago mobster looking to do business with Santiago and chew a lot of scenery. 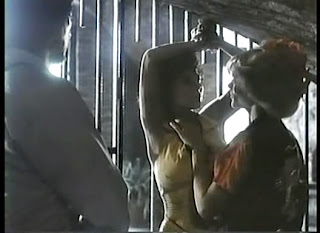 You can see where this is going: the models' little plane is shot down by Santiago's men, they make their way through the jungle for a while, get taken prisoner, and some rapes and tortures ensue at the hands of bisexual femme fatale Angel and a bunch of big guerrillas, including one dude in an E.T. tee shirt! The gang rape scene is also unique for being considerably more exciting than anything that happens in the first hour or so of the movie. Things pick up towards the end, when the models fight their way to freedom and lots of shit gets blowed up real good.

So, this is basically a sexploitation actioner with an all-star cast of overactors. Paul Smith looking pissed! Sybil Danning looking naked! John Vernon laughing hysterically at every occasion! Woody Strode smiling! Dennis Hopper cut out of the movie for drug problems! By comparison, the heroines are colorless. And, weirdly enough, for a movie with such bad acting firepower, the whole thing is sort of boring. The sex and violence come fairly late and it takes forever to get there. You feel like you're in the jungle and getting nowhere fast.
Posted by Rufus at 6:48 PM