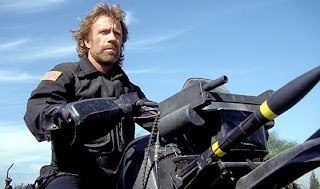 Unfortunately, the Delta Force is somewhat hamstrung by the plot necessities, which lead the first half to be the tense hostage-taking scenes that build up our resentment towards the terrorists. At least half the movie is a trouble-on-a-plane story and, while it’s all good and well, we’re here to see Chuck Norris and Lee Marvin kill people. The last hour, which involves a bunker siege and has some high-tech super motorcyles finally delivers the brainless goods, thank Chuck.
Posted by Rufus at 9:14 AM