I guess we're stuck with these faux-grindhouse movies for a while- at least until someone figures out the formula for making a real exploitation movie that doesn't verge on homage/parody. I don't really know why it is, but these recent films never quite seem "real" to me. So far, Dear God No! is near the top of the heap- I enjoyed it quite a bit and almost as much as the (often unrecognized) originator of this sub-genre, Jim Van Bebber's The Manson Family. Exactly why I enjoyed it more than something like, say, Machete I couldn't say. 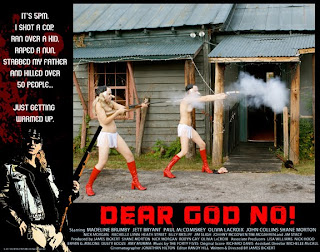 One really nice thing about the film is that we can actually call it a film accurately; it was shot on 16 mm, which sure looks a hell of a lot more like a 70s movie than digital video. I also liked the There's also a refreshing lack of CGI and a nice healthy amount of nudity, which was weirdly lacking from the Tarantino/Rodriguez double feature; back in the 70s seemingly everyone did a nude scene in film. There's also a nice lack of winks at the audience and genre in-jokes; god, I couldn't take another homage where the characters have names like "Savini" and "Carpenter"! Finally, there's a sort of gonzo, let's-throw-everything-at-the-wall-and-see-what-sticks tone that reminds me much more of old John Waters than Troma, which is a big advantage over Hobo with a Shotgun.

Oddly enough, Dear God, No! also works better because it's meaner than cat dirt. There's something really vicious and anti-social about the film, from its disemboweled nuns to its used tampon alcoholic drinks. The filmmakers want to make us squirm, which undercuts the pleasant nostalgia that usually comes with these flicks. Admittedly, I probably could have done without the extended rape scene or the set piece with the pregnant woman getting her fetus cut out; and, yeah, there is a sort of laziness to how often the "shocks" involve a random woman getting brutalized for no apparent reason.

But, again, there's something refreshing about how mean-spirited the film is. Most of these faux grindhouse flicks come off as polite young men having a few yuks at how "politically incorrect" the old 70s movies were. This one seems like it was actually made by dementoids, and that makes a big difference.