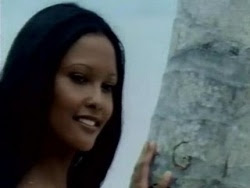 At this point, does it come as any surprise to hear that this movie has nothing to do with the Italian Emanuelle character, but just happens to star Laura Gemser? I suspect if Laura Gemser had appeared in Star Wars, the exploitation distributors would have called it "Emanuelle in Space". The alternative title for this one was "A Beach Called Desire", which is pretty bland, but has the advantage of not being false advertising. After all, this is just a Blue Lagoon rip off, not an Emanuelle rip off.
Okay, here's our story: Daniel (Paolo Giusti) is a member of a heroin addicted biker gang who gets freaked out when he sees his comrade screwing a strung out (maybe dead) girl on the beach and takes off in a motorboat (a motorboat called desire, no doubt), promptly knocking himself out while swerving to miss a large ship and waking up lost at sea after his boat has run out of gas. Luckily, he comes upon a seemingly deserted island with plenty of sun, surf, and food supplies, but sadly no heroin. You can't win 'em all.

When someone screws up Daniel's S.O.S. sign for the small planes that fly overhead regularly, he realizes that the deserted island is not so deserted after all, and soon he discovers a hut with a brother and sister, Juan (Nicola Paguone) and Heydee (Laura Gemser) living there. They’re the children of Antonio (Arthur Kennedy), who escaped from a prison years ago, apparently by swimming like a motherfucker, since he made it to this island. Even though “they say this island is damned, here I found salvation”. Antonio’s kind of a jerk and the brother and sister are having sex, which makes perfect sense, given that she’s played by Laura Gemser and walks around frequently wearing nothing but a loincloth.

oon, Juan is teaching Daniel how to spearfish and he’s teaching Haydee how to screw someone other than her brother. Understandably, he falls in love with her and she develops feelings for him, but can this dope addict and this brotherfucker find happiness together? Clearly, the island idyll has been disrupted by this outsider who Antonio considers a, “prisoner! Of dope! Money! Cars! Wars! The whole rotten mess!” He’s clearly the king of the kingdom and wants Daniel out of the picture. He’s hoping Daniel will leave with some fishermen who stop by the island regularly in spite of the supposed curse- this plus the planes going overhead regularly suggests that Antonio is really shitty at picking hideouts. Juan, meanwhile, wants to screw Heide, who doesn’t want him now that she has love. And Daniel is turning his life around and screwing Laura Gemser, so he’d really rather stay. Since this is an Italian sexploitation flick, you sort of figure it’s going to end violently- with these movies, you come for the sex and stay for the violence.

Basically, this is an Italian sexploitation rip off of the Blue Lagoon. The direction is workmanlike, but never particularly imaginative. There’s minimal plot and a boring low-speed chase at the end; and Laura Gemser is topless a lot. There’s an attempt at seriousness about the noble savage and the corrupting influence of civilization. But, mainly, it’s about the tits. Since Gemser is naked in a number of movies that are better (sort of), this one’s worth skipping.