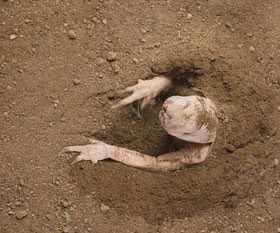 Basically The Searchers with monsters, The Burrowers brings horror to the old West. Set in the , 1879, the film begins with a Terrence Mallick style flashback and then an effective sequence in which a frontier family being assailed by something from the outside hides, unsuccessfully, in the root cellar. The next morning, Fergus Coffey (Karl Geary), who has been courting the daughter with plans to marry, arrives to discover his girl missing with half the family gone and the other half halved. So, the prairie folk form a posse to track down the Indians they reckon are doing terrible things to their Christian womenfolk. But, they soon find that what they’re tracking is a lot worse than Indians and most likely tracking them as well.

Setting off with a Confederate army regiment, Fergus befriends a freed slave named Walnut (Sean Patrick Thomas) who he can relate to on some level we’re to understand, as an Irish immigrant. The two break off with William (William Mapother), Dobie (Galen Hutchison), and John Clay (Clancy Brown) after the General tortures an Indian, making this subplot a bit desultory, but adding a sense of the evils that men can do to one another before we get to the evils that monsters do. It all pays off with a sardonic, bitter ending.

The monsters themselves, called “burrowers”, are pretty great. Living underground and coming out at night to feed, they inject their victims with a tranquilizing poison, bury them, and come back to dine on them later. As created by Robert Hall, they look a bit like crabwalking mole people. Horror fans will really appreciate how much of this is done with girls in rubber suits instead of cartoony CGI. These monsters have weight and solidity to them and seem like they could fuck you up.

J.T. Petty has done an excellent job of creating something genre fans haven’t seen before and pulling off a tense third act. The photography by Phil Parmet should be given special notice for making a low budget film look gorgeous, although obviously the locations helped. If there’s any weakness in the movie, it’s the dialogue, which veers frequently towards the cliché (“He took everything this country could throw at him”) and seldom sounds historically accurate. That’s the only problem I had with the thing though. Horror fans are recommended to dig this one up. (Get it?! Wow, that's a good one!)