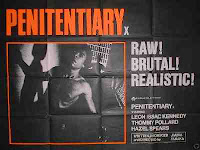 Much respect to Jamaa Fanaka. This, his third film, shows a continuous progression from his first two, both of which are pretty good. Oh, and again, he made all three feature-length films as student projects at UCLA. Penitentiary was shot with friends and volunteers at a decommissioned California prison as a graduate student film, although you'd swear to God it was a studio project. Man, it's great to discover a cool filmmaker out of the blue! This is why I still watch no-budget exploitation movies- to hear an original voice speaking.

Penitentiary stars Leon Isaac Kennedy as a young wanderer, Martel "Too Sweet" Gordone who gets picked up by a call girl en route to a diner rendevouz (and listening to the love theme from Welcome Home, Brother Charles on her radio!) that ends up going badly. Two bikers at the diner jump them and a fight ensues and, next thing you know, Too Sweet is in in prison, surrounded by several memorable miscreants with their own personality ticks. The filmmaking here is sharp: the characters are unique and even a bit cartoony, while still being believable. The basic story is a bit more generic than Welcome Home, Brother Charles, but it's the touches of color that bring out the characterizations.

Too Sweet is apparently pretty sweet-looking to his rapist cellmate Half Dead (Badja Dolja) who tries to make him his bitch before being beaten to a pulp by Too Sweet in a truly brutal fight scene that achieves a sort of violent kinesthetic beauty. Again, Fanaka scores the scene with avant garde jazz that adds to the intensity. He has said his inspiration here is Spartacus and you can see that in the scene, but it has to stand alone too as one of the best fight scenes in action filmmaking. It's a highlight of the film.

There's also a clear Spartacus parallel in that Too Sweet becomes an inspiration to his fellow prisoners who are "owned" by their larger rapist inmates. The slavery parallel is explicit in a scene in which Too Sweet tells fellow inmate Eugene that no man can own him. As you can imagine, Too Sweet soon becomes a prison boxer competing in matches set up for entertainment and betting by the warden. After this, the movie basically becomes Rocky in jail with Too Sweet overcoming his situation by boxing and through the mentor relationship with his trainer Seldom Seen (a great performance by Floyd Chatman). Chatman gets two of the best speeches in the film, however, wherein he explains his philosophy about being a lifer. I would hold up the first of these scenes to anything in Italian neo-realist cinema for the way they reveal hidden dimensions of a man that society holds to be marginal. These scenes and that initial fight scene are moments in which the movie transcends its exploitation origins.

In the end, there are still the usualy exploitation film problems. The dialogue is good but the acting is not always very good. There is a third act twist that's a bit unbelievable: Too Sweet didn't realize that he was jailed for murder, or the real killer did the deed in front of a diner full of people who didn't mention this fact during the trial? And there are a few boom mics that make their way into scenes.

But you watch these movies for those moments of weird transcendence that you can't get in mainstream films and not because they necessarily hold up as pure cinematic art. It's not suitable for the Criterion Collection, but Penitentiary has moments of true artistry and, to be honest, you can't say the same for any current Hollywood films.