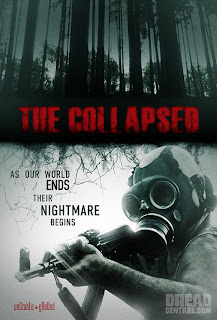 Post-apocalyptic movies tend to focus on bands of unique individuals, usually outsiders who likely had a tough personal philosophy before the collapse of civilization, who are brought together by virtue of literally being the last people on earth, and now have to find ways to work together in spite of this being often a major pain in the ass. Here you can insert Sartre's line about hell being other people and it can be even worse when they're family members. The Collapsed takes a somewhat unique approach by putting a family in a post-apocalyptic survival scenario and dealing with it as a family drama. For the most part, it works pretty well.

There has been talk lately of a revival of "70s style" character-driven horror movies and The Collapsed aspires to fit this mold. It's hard for me to judge since I watch way more horror movies from the 70s than ones from today- probably a good indicator that I sympathise with their tastes. At any rate, this film plays very much as a character study with a family in trouble.

Something has caused society to collapse and we begin the film not knowing what it is. Actually, we end the film not entirely knowing what it was either (my guess is squirrels), but with a pretty gory sense of how it happened. However, this means that we're basically thrust into the middle of the action, with father Scott (John Fantasia), mother Emily (Lisa Moule) and their son Aaron (Steve Vieira) and daughter Rebecca (Anna Ross). As they pass through a city, we get indications that society has collapsed and they're soon trying to get through the woods to some town to see if their son is alive. Something is out there stalking them in the woods in Evil Dead style. We don't know what it is and, after a while, we're pretty sure it's not zombies. Thank god it's not zombies again! Whatever it is though, we soon get a very horrific indication that it's a mean motherfucker of a problem.

The film does a pretty good job of creating a palpable sense of dread and horror and isn't afraid to kill off characters that we've become invested in. It also pulls a nice trick by keeping the evil threat off camera for long enough that we're as bewildered as the characters. When we finally find out (some of) what's going on, I liked that the twist was both plausible and changed how we understood the rest of the story. It was also a fairly solid genre picture made for what was clearly a very low budget. The film is being releasing on DVD next year and the filmmakers have hopes of starting (another fucking) franchise. Mazel tov!

Anyway I have a few problems (like I always do!) with the main one being that that trick of keeping the threat off-screen can only be effective for so long. After about an hour of watching the characters walking around looking scared in the woods and not necessarily playing off anything and it starts to look like kids playing make believe in the backyard. Amazingly, the final twist actually justifies this problem, but it's easy to tune out before we get there. The other problem is that we're increasingly focusing on Dad along the way and Fantasia gives a fairly flat performance. In general, the acting isn't memorable and the dialogue is basically passable: a lot of "It's your turn for lookout" and "we'll sleep here for the night" kind of stuff. Finally, for what's basically a family drama, there sure could have been more in the way of psychological depth. There are some family secrets, but married people know that marriages are usually way more complex than this. At times, it's easy to forget that these people are supposed to be related.

Now that all that's off my chest, I'd still recommend The Collapsed to horror fans. It's not entirely scary but it does have a sense of tension and mounting horror and maintains that mood for most of the film. It's also nice to see filmmakers returning to character-driven pieces and atmosphere. So, I'm fairly sure that, if you're a horror-fan, you'll enjoy this one. If you're not a genre fan... you might not.
Posted by Rufus at 9:10 PM