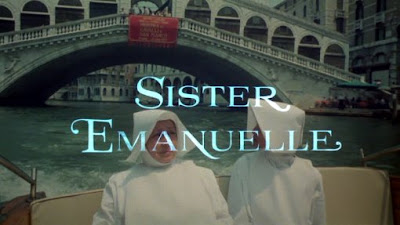 Nevertheless, Sister Emanuelle is actually a very entertaining movie, thanks to the incorporation of some much-needed (intentional) humor. The story concerns Monica, played by the lovely Monica Zanchi (who made out with Gemser in Emanuelle and the Last Cannibals in front of a waterfall and behind a smoking monkey), a trampy young girl whose rich father and equally trampy new young wife have her put in a convent, but not before new mom French kisses her goodbye in front of the nuns!
Gemser plays "Sister Emanulle" (or 'Sister Manuelle' occasionally) who spends the first bit of the film transporting the girl to a secluded convent via motorboat through the canals of Venice and a train, where the young harlot slips off to blow the conductor before getting nude and coming on to the Sister in their cabin. This provokes the following, awesome, exchange: Gemser: "You're a lost soul!" Zanchi: "That's alright by me as long as I have a body." This is my kind of girl.

There is also a great scene in which Monica recounts to the nuns the tearful story of being assaulted by three young strangers at the beach in the voice-over, while the flashback actually shows her seducing them. Zanchi does a great job playing a young girl whose motivation consists of being basically impressed with her body and the trouble she can cause with it. It's obviously a one-note role (and film), but everyone has fun with it, and it's nice that the character's lie is the closest we come to sexual assault in the film (a problem in the Black Emanuelle series). 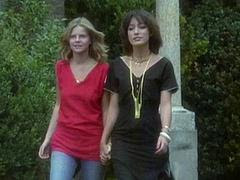 Anyway, off they go to the convent, where Monica immediately takes off and Sister Emanuelle has to chase her down and subdue her. She struggles with the girl and wrestles her into sexy submission but catches hell for wearing the wrong panties under her habit! Apparently, the Mother Superior is a bitch on wheels and forces the nun to wear woolen undies, which is clearly difficult for her.

Intrigue increases after Monica gets roomed with Annie (Vinja Locatelli), a square girl who thinks she's in line for sainthood! Nevertheless, Monica repeatedly comes on to her probably causing some issues with sainthood, but soon discovering that Miss Goody-two-shoes is okay with having her pussy eaten. Sister Manuelle, meanwhile, seems to be getting sick of this nun shit as well, as indicated by her wearing increasingly sexy underwear. If the plot thickened any more it would be concrete.

But thicken it does! Into the picture comes an escaped convict, played by the versatile Gabriele Tinti, who is in most of the Laura Gemser films. Monica first discovers him and hides/conspires with the convict in order to bonk him repeatedly in soft focus. She also implicates Emanulle by introducing her to the thug while threatening he'll massacre the students if she tells anyone else. Eventually, Gemser and Tinti have sex, pretty much a given in the films they did together. Sister Manuelle also punishes Monica by tying her up and having sex with Tinti in front of her, something that would totally happen. She then tries to burn the girl's bush with a torch!

Thankfully, it was all just a dream. This is good because, otherwise, the storyline might seem a bit silly.
Posted by Rufus at 7:16 PM