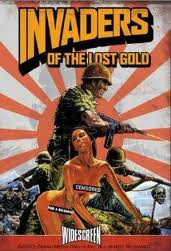 A low-budget Indiana Jones knock-off from Italy that works much better than it has any right to, Horror Safari (A.K.A. Invaders of the Lost Gold [a title that's even funnier than Horror Safari- how in the hell does one invade gold, especially if it's lost?]) begins with a Japanese platoon during WWII stealing a chest of gold and hiding it in the jungles of Japanese-occupied Philippines. In the process, the natives pick off most of the platoon via decent gore f/x. I also like the costumes in this sequence. I mean, sure the film is cheap. Hell, if you took all the movies I watched last year and added up their budgets, you still couldn't finance Avatar! But this one works because it looks a lot like one of those B-movies Hollywood used to make in the 40s- in other words, the very movies that Raiders of the Lost Ark was ripping off, this Raiders rip-off evokes- it's the cycle of cinematic life!

Anyway, three Japanese soliders survive the massacre and they swear to return someday. 36 years later, Rex Larson (Edmund Purdom), a rich bastard, shows up asking the survivors about the gold. He kills one of the ex-soldiers in a shootout and the next commits hari-kari. Luckily, the third, Mr. Tobashi, is willing to go along on the rich bastard's planned expedition to retrieve the gold. Along for the ride are Larson's partner, Mr. Jefferson (David DeMartin), Jefferson's daughter Janice (Glynis Barber), Tobachi's wife Maria (played by Laura Gemser, naturally) and the American adventurer Mark Forrest (Stuart Whitman), who has a drinking problem, did jail time, and has a dark secret in his past involving the rich bastard, but is the best there is at leading these expeditions. Whitman's character, incidentally, is introduced during a bar brawl that seems to suggest that American sailors are astoundingly racist 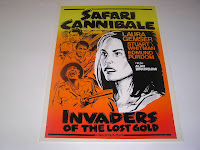 and go to the worst titty bars in Japan.

Off they go into the jungle and Forrest hits it off with Janice, which is a bit disappointing for Maria, his ex-lover who wants to start things up again. The strangeness of Laura Gemser not having a sex scene in the film does not tear a hole in the time-space continuum, thankfully, and probably because she does have a nude scene. Her nude scene, incidentally is very brief, and her part in the film is minor; but you'll notice how central it is to the film's advertising! It's also sort of weird because she goes skinny dipping and then cries out in pain for no apparent reason and we're to understand that her character has been killed. I'm really just amazed that the film was never entitled "Emanuelle Goes on a Horror Safari".

As you might have guessed, characters are gradually picked off one-by-one in creative ways that eschew continuity or plot coherence, and at the end we find out who was doing it. This shouldn't be much of a surprise- after all, it is a horror safari. But, you might be surprised to find that the film doesn't become a cannibal epic. It's still got some decent gore, a few thrills, and some brief nudity. Other reviewers have complained that it's not very exciting. But I liked the throwback aspects of it and found it more competant than most of the films I've seen lately. Maybe I do need to stop watching so much crap though.