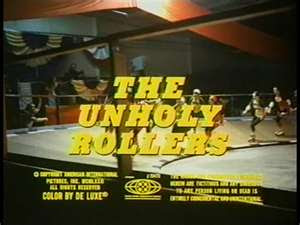 It was sort of a thing for exploitation filmmakers in the 70s to try to capitalize off of trends that were popular with the young people they were trying to get out to the drive-ins to watch their movies. Hence there were flicks like The Van about customized vans and The Unholy Rollers about roller derby girls. This probably would not work as well today; it's hard to imagine Facebookin'! or Cell Phone Fever being nearly as cinematic.

Roller derby, however, is back in force. Our local team, the Hammer City Roller Girls, are kicking all sorts of ass, and trend-chasing acting robot Drew Barrymore has made a recent flick about roller derby with less bare breasts and more of a female empowerment message than the old flicks- sort of "roller grrrl" let's say. Roger Corman 's version, Unholy Rollers, takes a totally different approach. Here, there's less in the way of female empowerment and more in the way of female dis-enshirt-ment. 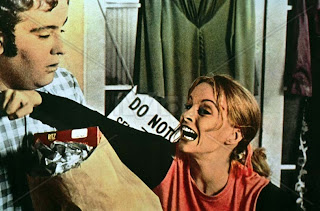 The story concerns Karen (Claudia Jennings), a spitfire worker in a dog food canning plant who starts a fight with her pawing boss and quits, putting her and the kooky gearhead couple, played by Candice Roman and Alan Vint, who live with her and screw all day into a predicament. In order to do something with her life, Karen joins the Los Angeles Avengers, a successful roller derby team run by some sleazy managers and popular with a crowd that's out for blood. Much of this is played for corny Mad Magazine style laffs and the team isn't exactly noble, but Karen's supposed to be out-of-control. Too much success. She shoots a gun at people from the back of a boyfriend's motorcycle, and yells at her teammates a lot, and then finally loses her marbles and starts smashing everybody like the Hulk. Because she can't put the team first, they strip her nude in a bar and trash her new car!

The movie never goes too long without displaying some female flesh, staging a roller derby sequence, or having Jennings freak out. The derby scenes are pretty well shot, if a bit badly lit, and edited by a young Martin Scorsese in a way that packs in a lot of action. There's also a great supporting cast, with exploitation luminaries like Collins, Jennings, Betty Ann Rees and Roberta Collins in prominent roles.

The big problem with the movie is the main character is a loony asshole for most of the flick. Jennings plays Karen as a chick who takes no shit, even when people really aren't giving her any. We get some indication of why she's this way when the film introduces her lower class mother, but suspect Mom is right when she calls her daughter crazy. Her character doesn't really change much over the course of the film- she's raging pissed at the beginning and out-of-control pissed at the end. It's more a story of lunatic empowerment than anything else. Definitely worth seeing if you're a derby fan- again the derby scenes are pretty good, although the Avengers only ever seem to take on one other team!- or a fan of exploitation actresses though.
Posted by Rufus at 7:26 AM