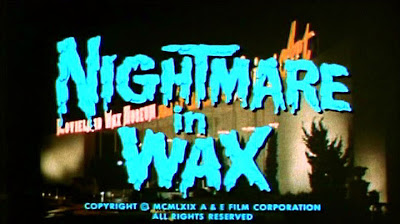 This is exactly the kind of schlock that used to get played on Creature Feature after midnight on Saturdays when I was a kid. I probably even saw it back then. It's got all of the elements of a B horror movie: a washed up Hollywood star (Cameron Mitchell in this one and so many others), spoooooky theremin music, lots of scenery-chewing, and a story so dumb it would only be convincing to a child. As a child, I might have seen it and been convinced.

The story is that someone is kidnapping Hollywood stars and drugging them so they remain paralyzed and then using them as figures in a Hollywood Wax Museum. Who's doing this? Former Hollywood make-up artist Vincent Renard (Mitchell), that's who! The movie lets us in on this secret five minutes in. About ten minutes in, they explain why: he was in love with an actress (Anne Helm), but the fat fuck producer Max Black (Berry Kroeger) also loved her and mutilated him with a flaming cocktail (in full view of an entire party of people who apparently didn't notice how intentional the attack was). 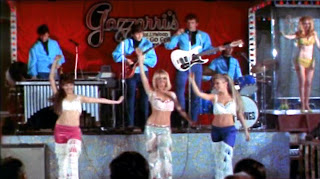 Well, old putty face probably could have kept porking the actress, but decided instead to work at the wax museum, which for no apparent reason allows him to work with a giant vat of boiling wax uncovered in the basement. In fact, that vat of wax, which is akin to big bubbling vats in classic schlock films, is the single best thing about the movie. Probably second place would go to the go-go dancers shaking their goodies to a hip band called the T-Bones about halfway through. Vincent trolls the go-go club for victims, Max trolls the club for pussy, and otherwise the scene has nothing to do with anything, but was probably a career high point for the T-Bones.

The worst parts of the film are an idiot security guard who's here for comedic effect, and especially Mitchell's dialogue to the paralyzed victims, which just goes on for-fucking-ever. If this thing was shot in more than a weekend, they wasted time. Also, if these "wax figures" are alive, how long can they last until they starve to death? It's not like the guy is feeding them. Probably a crapping wax dummy would arouse suspicion anyway. Finally, there's a huge subplot in which two detectives try to solve this big mystery of where these actors are disappearing to- they don't suspect that it could be the batshit crazy, mutilated weirdo with a serious grudge against the studio who just happens to be putting up really lifelike figures of those actors in his wax museum almost immediately following their disappearances! Nobody even suggests that might be in poor taste! I mean, if there were two detectives on the force who weren't fictionally brain dead, the whole movie would have been over in five minutes.