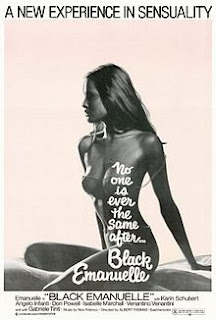 I know- this isn't supposed to be Rufus's House of Sex, is it? Well, no, but honestly, who worries about what I post here? Kung-fu movies and racing car movies aren't exactly horrorific either. I like to think that the world of exploitation filmmaking is my dirty oyster.

So, Black Emanuelle: the first Italian Emmanuelle knock-off. Laura Gemser, who appeared in a bit part in the second official film in the French Emmanuelle series, here plays Emanuelle with one m, a globetrotting, sexually-liberated journalist in the 70s. A few things about this: 1. She's actually listed as Emanuelle and not Laura Gemser in the credits, "Emanuelle in 'Black Emanuelle', which amused me, 2. Laura Gemser is actually Indonesian, which I guess seemed black to the Italians, 3. She's often called 'the black Emanuelle' in these movies, which I guess is a bit like Blackula, but not black. Much of the movie stresses her feelings about being black, which I think is supposed to say, "Hey, we're not ripping off the French Emmanuelle here- she was white! Totally different movie!" (We should make a new blaxploitation film. Maybe "Clash of the Black Titans".)

Anyway, the begins with Emanuelle on a plane. Alex Cox has called planes the train-entering-a-tunnel of the Emmanuelle movies. The French Emmanuelle was screwed on a plane in the first film in a scene that is referenced constantly. Here, the black Indonesian Emanuelle sees a couple fooling around on her plane to Nairobi while a 70s soft rock song plays on the soundtrack. She's a photographer coming to Africa for her magazine: this is the plot of all the Italian films. You can pretty much see the whole Laura Gemser series as one really long movie about a photojournalist traveling the world and fucking a lot of people.

In Nairobi, she meets up with Ann, an English journalist, and Gianni, her Italian husband, and rooms with them. The first night, they introduce Emanuelle to the European expat community at a party in which everyone screws around with partners other than their spouse and jumps into the pool. The next day, they stop by the gas station Ann can screw her mechanic, go out dancing in the evening, and Emanuelle screws around with the Italian husband. Gianni and Emanuelle eventually have sex. Later, Emanuelle goes on a safari with the wife and has sex with her. Then she fantasizes about having sex with a tribal chief. Oh, you get the idea. Bored yet?

The Emanuelle movies are basically travelogues with sex. The problem is a travelogue can get boring fairly quickly, and so can a sex film- both of these are activities that are more fun to do than watch in a movie. After a while, the movies are a bit like watching someone's slides from their vacation while they tell you, "We had sex here.... she blew me in this hotel..." They lag mostly in the long spaces with no dramatic tension, which is hard to establish when your main character has no sexual inhibitions to overcome. Emanuelle never really changes- she just wants to have sex. It's hard to blame her, but it's also hard to be enganged in the storyline because you can imagine fairly easily how the story will turn out: the beautiful horny woman with no sexual inhibitions will probably get laid.

Black Emanuelle tries to create dramatic tension and, indeed, it picks up a bit after Emanuelle begins her affairs with the husband and wife- she's falling in love with him, but he's a bit of a player and rebukes her as a tramp, so she screws another man to make him jealous as well as his ex-lover Gloria for the hell of it. (At this point, there is a scene with some servants screwing that is stolen directly from the French Emmanuelle- I'm ashamed to know that.) But what will she do? Commit herself to Gianni and stay in Nairobi? Leave him and remain free? Probably you can guess.

Clearly, however, Emanuelle doesn't just want sex without emotion. In fact, she tells the Italian stallion her thoughts on love, "Emanuelle doesn't need drugs to be sacrificed to love. Love isn't just an explosion of the senses. Emotion counts too." So true. Rufus agrees, but he needs drugs to finish this movie.

The whole gang goes on another safari and there's a sex scene with Emanuelle and Gianni by a waterfall- also swiped from the French movie. But Emanuelle needs to be free and she takes off, only to be gangbanged by a cricket team on a train, in an uncomfortable scene that reportedly made Gemser uncomfortable as well. What exactly is this scene trying to say anyway? The dialogue suggests that she's sexually insatiable and cannot be with just one man when there are cricket teams available, which is certainly legitimate. But then why is she asleep for most of the gangbang?

Meanwhile, Gianni has run off to find Emanuelle, ending his marriage. She turns him down in a dramatic speech delivered directly to the camera like a scene from Annie Hall: "Something always happens. Believe me... It wouldn't work... Love is not enough Gionni. Maybe it's my work, my appearance, my skin. Or maybe it's just fate. But I must be free... That's what it's like to be a woman. Or, at least, a woman like me."

Okay, I know I sound crazy here, but this is what I find totally fascinating about these movies. The series is obsessed with female sexual freedom. I mean, sure, they're stupid sexploitation movies, and definitely they can fit in a lot more sex if she's not in a monogamous relationship; but how many sex films today have anything to do with a woman's right to find sexual happiness however she chooses? Actually, how many films today are about that?
Posted by Rufus at 7:40 PM