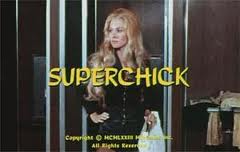 As we all know from popular mythology, stewardesses are like sexual buccaneers, sailing the skies in search of sexual conquests, with a different partner in every port. Whether or not this is true (and, oh lord, do I wish it was!), Superchick has fun with the idea. Granted, it's corny as hell, and in no hurry to get to a plot of any sort either. 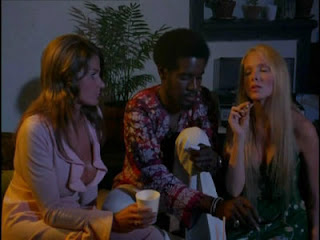 The story plays as a sort of picaresque with stewardess Tara B. True (television actress Joyce Jillson), as a sort of harlot-in-disguise. By day, she dresses as a sort of frumpy stewardess. By night, she's got a different man in every city: a rich surgeon who's afraid of germs and barely touches her in New York; a beach bum playboy (Tony Young) in trouble with the mob in Miami; a teen idol pop singer (played by Timothy Wayne Brown) in Los Angeles. These are the main men in her life, but she also has a date with a friend of the pop singer that ends in a drug bust, a fling with a pervy old Hollywood actor (played with real relish by John Carradine), and does her part for America by fucking a marine in the airplane bathroom. Incidentally, she's also skilled in karate and beats up some bikers and the mobsters who want to make her a hooker.

It's interesting how the virtues of these movies come with time. Superchick is a goofy movie with subpar Borscht belt style jokes and really slow plotting. Nevertheless, it's also got an easy going positivity about female sexuality and a strong female lead, which aren't exactly easy to come by in our supposedly more enlightened age.
Posted by Rufus at 9:01 AM